The viral photo is of IPS Anand Veeresh Kaladgi, who is currently taking training at the National Police Academy. He is not handicapped. His photo is being shared with fake claim. 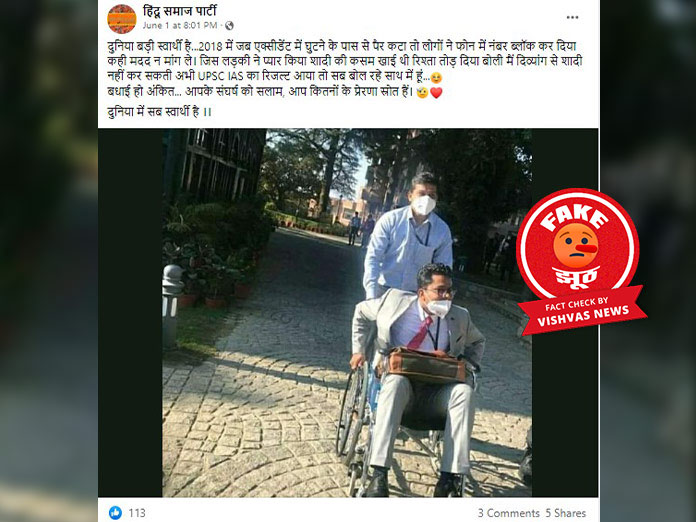 New Delhi (Vishvas News). After the result of UPSC-2021, a photo is getting quite viral on social media. In this picture, a person is sitting in a wheelchair. By posting the photo, users are claiming that the man in the picture is Ankit whos leg was amputated after an accident in 2018. After this people even blocked his phone number. The girl who had promised to marry him refused to marry him. In the latest UPSC results, he secured a position and people are now getting back to him. Vishvas News in its investigation found that the viral photo is of IPS Anand Kaladgi and not of Ankit. The viral claim with his photo is false. Nothing like this has happened.

Facebook user ‘Hindu Samaj Party’ (archive link) shared the photo on June 1, and wrote “The world is very selfish… in 2018 when his leg was cut off near the knee in an accident, people blocked the number and did not help. The girl who had vowed to get married broke the relationship and said that I cannot marry a handicapped, now the UPSC IAS result has come, and everyone is getting back to him. Congratulations Ankit… Salute to your struggle, you are a source of inspiration for so many. Everyone is selfish in the world.”

We searched it to check the tweet. We got its cache version. Its profile reads, Career Diplomate, United Nations.

In the result of UPSC-2021, we found the name of Ankit Kumar Choksi at 89th rank, Ankit Sinha at 472, Ankit Singh at 594 and Ankit Baraik at 667. However, we did not find any viral claim related to these names.

We searched the photo with Google reverse image. We found this photo on the verified Twitter account of Lal Bahadur Shastri National Academy of Administration (LBSNAA). This was tweeted on 21 October 2020. Along with this photo, some more photos were also posted. In one of these photos, a girl can be seen blindfolded and in one photo the young man can be seen holding crutches. Along with this it is written that activity and discussion on rights of ‘Divyangjan’ for Trainee Officers of 95th Foundation Course.

On further searching, we found the Instagram account of IPS Anand Kaladgi. We found a lot of facial similarities between IPS Anand and the man in the viral picture. For more details, we spoke to Anand Kaladgi. He said, “The viral photo is mine. This photo was taken during my training. This training is given in order to make us feel the handicapped problems better. Some trainees were even blindfolded. His photo is being wrongly viral on social media. There is nothing like viral claim.” Anand is currently taking training at the National Police Academy.

We scanned the Facebook page ‘Hindu Samaj Party’ that shared the IPS officer’s photo with false claim. More than 18 thousand people follow this page made on June 9, 2019.

Conclusion: The viral photo is of IPS Anand Veeresh Kaladgi, who is currently taking training at the National Police Academy. He is not handicapped. His photo is being shared with fake claim.