Fact Check: KBC is not running an online lottery on WhatsApp, readers are asked to be cautious

Vishvas News in its investigation found that the KBC lottery is a scam and that readers are urged not to share any personal details with these scammers. 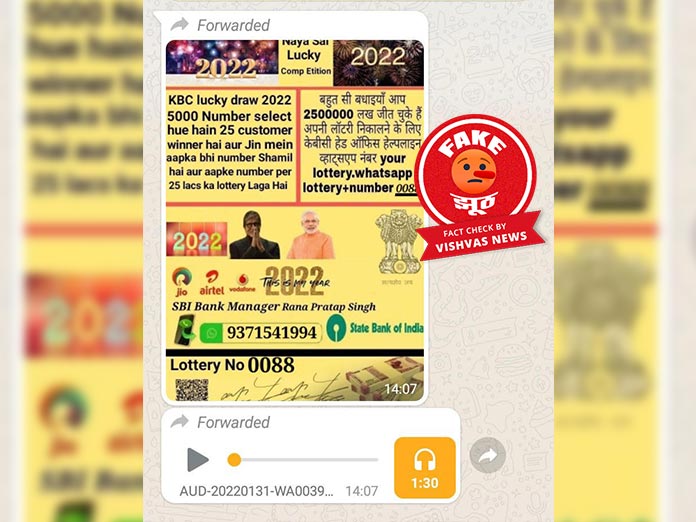 New Delhi (Vishvas News): Vishvas News came across a viral message being shared on WhatsApp which informed that the people have won a lottery from KBC lucky draw 2022 contest. Vishvas News in its fact check found the viral message to be a scam and asks the readers not to fall for it.

People are receiving a graphic and a voice note on their WhatsApp numbers. The banner claims that they are the winners of a lucky draw. It also mentions a lottery number, with image of actor Amitabh Bachchan, Prime Minister Narendra Modi, State Bank of India, and various mobile operators. It also has a mobile number mentioned on the banner.
The message is also accompanied with a voice note that claims that the person is calling from WhatsApp customer office, New Delhi.
The voice note claims that the number has won 25 Lakh Rupees. It says that the lottery amount has reached State Bank of India in Mumbai and that the number mentioned on the banner is that of its manager. And then they will provide the details. Also, the person asks that you have to save the number and then place a WhatsApp audio call.

Vishvas News also checked the number through WhatsApp. The person had mentioned ‘KBC office manager’ in his bio.
We placed a WhatsApp call on the same number. The person posing as Rana Pratap, manager asked us the contact details and sent another voice note. In this voice note he asked us to send the bank account number, full name and a picture of self.
The voice note also mentions not to publicise this lottery and not to tell people about the same.

On checking about the KBC lottery on Twitter, we found a tweet by Ahmedabad police posted on June 28, 2021.

Vishvas News found out that this is an old scam and that it comes back again and again.

Economic Offences Wing Cyberabad, too had posted about the same on their Twitter profile.

Vishvas News in its next step of investigation contacted cyber security expert Mahesh Rakheja and asked him about this viral KBC Lottery message. Rakheja said, “This scam has been going around since over 3 years now. People must understand that if they have not applied for or not bought the lottery there is no chance of winning it.”
Mahesh Rakheja also said that these messages are sent from a virtual number which can be bought from any android application and are available at a minimum of 80 Rs.

Conclusion: Vishvas News in its investigation found that the KBC lottery is a scam and that readers are urged not to share any personal details with these scammers.