Viral post stating Eknath Shinde is offering free medical services to the people below annual income of 75 thousand rupees is misleading. No such announcement has been made by the government and the CM yet. 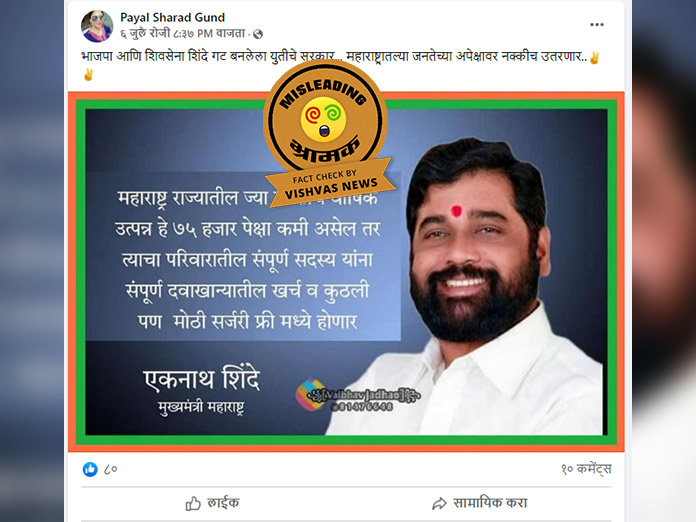 Vishvas News (New Delhi): Vishvas News came across a post going viral on Facebook. The post claimed that new Maharashtra chief minister has announced free medical services including the surgeries to the people of the state and their families whose annual income is less than Rs 75 thousand. Vishvas News did an investigation of the post and found the post to be misleading. The current government is thinking to implement this scheme but has not yet taken steps in that direction, neither Eknath Shinde has announced this himself.

Translation: The coalition government formed by the BJP and Shiv Sena Shinde group… will definitely meet the expectations of the people of Maharashtra

Translation: If the annual income of a person in Maharashtra is less than 75 thousand, all the members of his family will get the entire hospital expenses and any major surgery for free.

Vishvas News started the investigation with simple keyword search. We checked for some major changes he has made since he became a CM.

This year in May, Eknath Shinde as guardian minister had inaugurated Matoshree Gangubai Sambhaji Hospital, other facilities on May 3

We found a report about it on The Free Press Journal.

We could not find any reports about implementing the scheme of free medical services for the people and families with annual income less than 75 thousand rupees.

In the next step of investigation we contacted media coordinator of Maharashtra chief minister, Viraj Muley over phone. He told us that the viral post is misleading. The steps are being taken in the direction to see whether this scheme of providing free medical services could be implemented, but that has not been done by the Maharashtra government and the chief minister Eknath Shinde yet.

In the last step of investigation, Vishvas News did a social background check of the Facebook user Payal Sharad Garud who posted it. She is a volunteer of Bharatiya Janata Party and is a resident of Borivali.

Conclusion: Viral post stating Eknath Shinde is offering free medical services to the people below annual income of 75 thousand rupees is misleading. No such announcement has been made by the government and the CM yet.