Viral photograph of JP Nadda giving the bouquet to Sachin Pilot is morphed. The photo was clicked in March when Jyotiraditya Scindia joined BJP. By the time of filing this news, Pilot had not joined BJP. 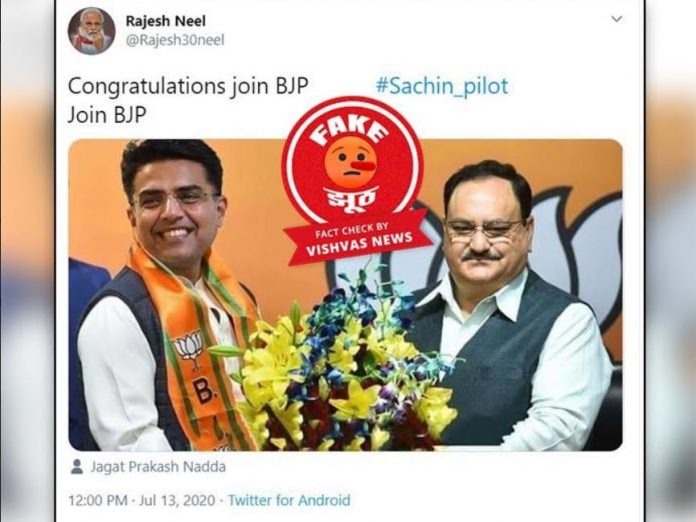 New Delhi (Vishvas News): Amidst the ongoing Rajasthan political crises, a photograph of former Deputy Chief Minister of state Sachin Pilot and BJP president JP Nadda is being circulated on social media. One can see Nadda giving flowers bouquet to Pilot in the photo. It is being claimed that Pilot has joined the Bharatiya Janata Party (BJP).

Vishvas News investigated this post and found the claim to be false. The viral photograph is morphed. In the original photograph, Nadda is welcoming Jyotiraditya Scindia in BJP.

Facebook page ‘Mota Bhai’ also posted the same image with a similar caption. An archive link to this post can be found here.

Vishvas news performed Google Reverse Image search on the viral image and found that the image is morphed. We found the original image which was clicked when Jyotiraditya Scindia joined BJP in March. We also found many media reports about Scindia joining BJP using this photograph.

As per the media reports, Scindia resigned from Congress and joined BJP in March. The viral image is created by replacing Scindia’s face with Sachin Pilot’s face keeping other elements unchanged in the image.

One can see the original image in the video bulletin uploaded on the YouTube channel of Aaj Tak.

As per the report by Dainik Jagran Sachin Pilot was dismissed by the Congress from every office he held in Rajasthan including the posts of Deputy CM and State President on July 14 accusing him of playing into the hands of the BJP.

To confirm the news Vishvas News contacted BJP spokesperson Tejinder Pal Singh Bagga who told us that the viral piece of information is false, Pilot has not joined the BJP till now.

Vishvas News scanned the profile of the Twitter user “Rajesh Neel” who had uploaded this viral post. He hails from Jaipur and has joined Twitter in January 2018.

Conclusion: Viral photograph of JP Nadda giving the bouquet to Sachin Pilot is morphed. The photo was clicked in March when Jyotiraditya Scindia joined BJP. By the time of filing this news, Pilot had not joined BJP.