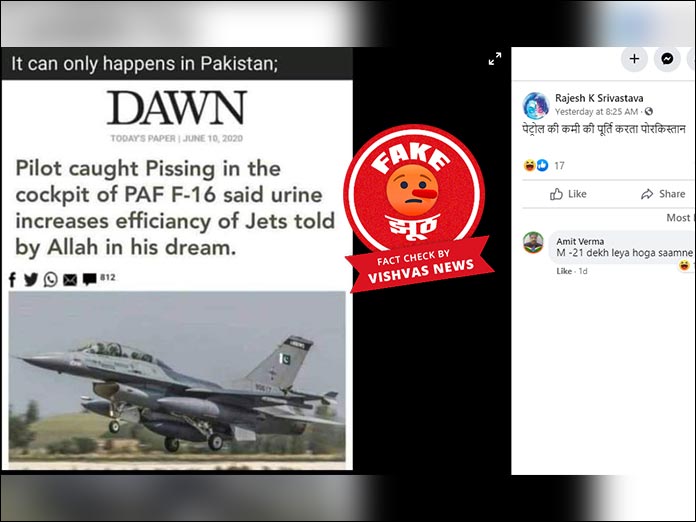 New Delhi (Vishvas News): A post going viral on social media shows a screenshot purporting to be a report published in DAWN, a Pakistan daily newspaper. As per the headline of the post, a pilot was caught urinating inside a fighter jet. When Vishvas News investigated, we found that the viral photo is edited and is shared with a fake claim.

A screenshot purporting to be an article in the Dawn newspaper Pakistan is shared with the headline: “Pilot pissing in the cockpit of PAF F-16 said urine increases efficiency of jets told by Allah in his dream.” The archived version of the post can be checked here.

Vishvas News investigated and found no such article published in DAWN as claimed in the viral post.

Also, there were several grammatical errors in the headline, ‘efficiency’ being misspelled as ‘efficiancy’ and a fullstop in the end. A full stop is never used in the headline. This clearly states that the screenshot is edited.

We searched on Google using appropriate keywords using the time filter, setting it as June 10, 2020, as mentioned in the screenshot. There was no such report published on this date as claimed.

We scanned the profile of the user who shared the post. Facebook user Rajesh K Srivastava is followed by 400 people.

Conclusion: A screenshot purporting to be from Dawn, Pakistan claiming that a pilot was caught urinating inside a fighter jet, is morphed and fake.