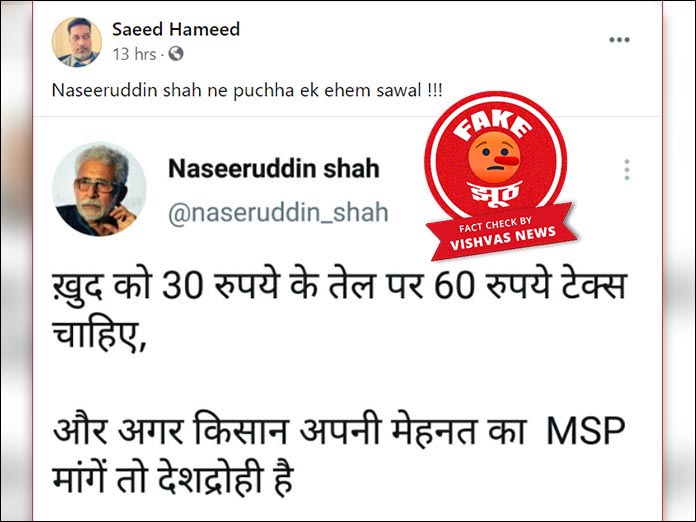 New Delhi (Vishvas News): A tweet in the name of Bollywood actor Naseeruddin Shah is going viral on social media. In the tweet purporting to be from the actor’s account, the actor is allegedly supporting the farmers movement.

Facebook user Saeed Hameed posted the tweet from the fake account of Naseeruddin Shah on January 8. The post read: ‘They want 60 rupees tax on oil of 30 rupees, and if the farmer asks for MSP of his hard work then he is a traitor.’

We found some reports stating that the tweets from the fake Twitter account of Naseeruddin Shah are going quite viral. In a news published on OneIndia’s website, Ratna Pathak, wife of Nasiruddin Shah, was seen saying that Naseeruddin does not have an account on Twitter. There have been many tweets from a fake account named after him. A complaint has been filed regarding this. Read the full news here.

Vishvas News contacted Smita Srivastava, the lead correspondent of Dainik Jagran covering Bollywood in Mumbai, and shared the viral post with her. She spoke to Veevan Shah, son of Nasiruddin Shah. Vivaan said that this is a fake account. His father is not on Twitter.

We scanned the profile of the Facebook user Saeed Hameed who shared the screenshot of the fake tweet. We found that the user is based out of Mumbai and is a journalist by profession.

Conclusion: Vishvas News investigated the viral post and found that Naseeruddin Shah does not have an account on Twitter. The viral post is fake. However, in a recent interview, Shah favored the farmers movement.