Fact Check: No, a woman did not become pregnant from eating squid 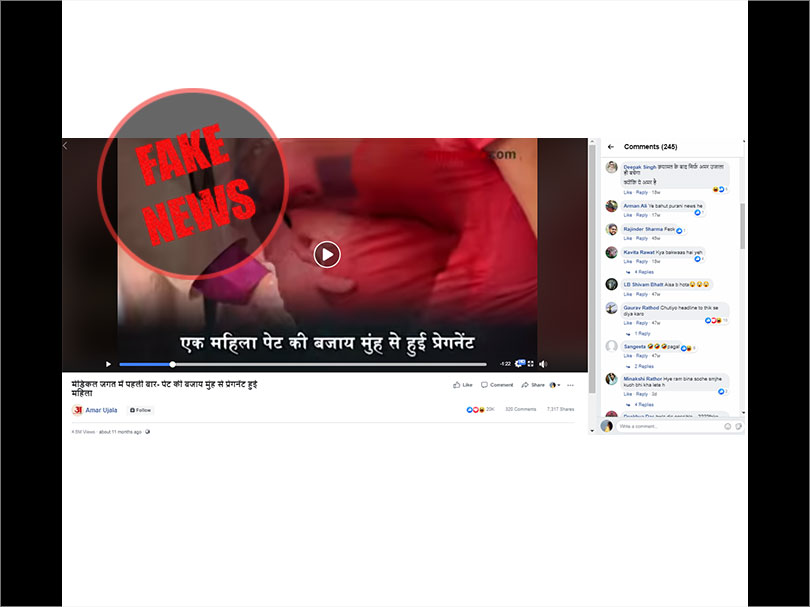 A Facebook post with a video is going viral in which it is claimed that a 63-year-old woman, from South Korea, was impregnated via mouth after eating calamari, a squid-based delicacy. Vishvas News investigated the video and found that the claim that a woman got pregnant via mouth by eating squids is false.

The viral video is shared by the Facebook page ‘Amar Ujala’. The post has
4.6 million views, 19000 reactions, 7317 shares, and 320 comments. The video is supported by a caption: “मेडिकल जगत में पहली बार- पेट की बजाय मुंह से प्रेगनेंट हुई महिला (For the first time in the medical world- a female impregnated via mouth rather than stomach). The video shares a grotesque tale of a 63-years-old South Korean woman who got pregnant by eating semi-cooked squids. As per the viral video, the incident has been also published by the Journal of Parasitology.

The bizarre story claiming that the woman in South Korea was impregnated via mouth after eating squids, made tabloid headlines as various media outlets picked up the story.

We checked the comments of the viral Facebook post and found many users questioning the authenticity of the claim.

We searched the claim on Google using relevant keywords and found many related stories.

As per the claim, as soon as the woman ate the squids she felt pain in her mouth and spat the undercooked seafood out, but still could feel the bugs burrowing into her mouth. As per the report published by Pathology International, “We found that several small whitish spindle‐shaped stings were stuck to the mucous membrane of the hard palate. The biopsy showed that the sperm bags of the squid had thrust into the squamous epithelium of the patient. The remaining part of the raw squid consisted of the testis and the sperm bags. After removal of all stings, the pain reduced, and the wound healed in due course.”

The report published on Journal of Parasitology didn’t make things sound any better. It stated: “On the basis of their morphology and the presence of the sperm bag, the foreign bodies were identified as squid spermatophores.”

We then found a report by Snopes, which clarified that the woman never got pregnant with squid. The report states that, a woman received several painful stings after she ate the squids in 2011. This woman was not impregnated by a squid.

Here’s a snippet from the abstract of the report:

There is a big difference between insemination and impregnation. Impregnate (in reproduction, not manufacturing) means that successful fertilization has already taken place: sperm met with egg and an embryo is developing. This did not happen. There was no impregnation, no pregnancy, and no baby squid.

We also contacted a doctor and here is what he replied:

Dr. Sajeev Kumar, C.S.C, D.C.H, M.B.B.S, General Physician: This is absolutely false. It is not possible to become pregnant from eating squid.

The claim that the South Korean woman was impregnated by a squid is misleading. She received several painful stings after she ate the squids.

Nice clarification. There is a need for news consumers to ensure that the news they are getting are not the fake ones