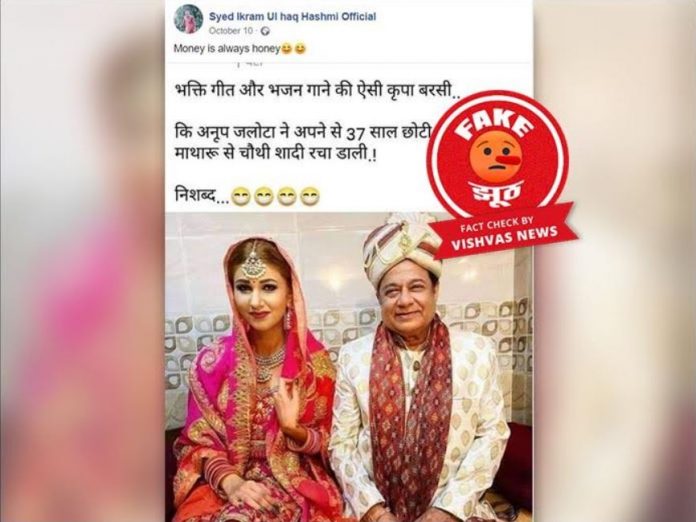 New Delhi (Vishvas News). A picture of singer Anup Jalota and singer-actress Jasleen Matharu is getting viral on social media. In the viral photograph, Jalota can be seen wearing a turban whereas Matharu is also in a traditional outfit. It is being claimed that both have tied a knot.

Vishvas News investigated and found the claim with the viral post to be fake. The viral photograph is from the set of their upcoming film.

The photo has been shared on the Facebook page “Syed Ikram Ul haq Hashmi Official” with a caption in Hindi, which roughly translates: Anup Jalota married for the fourth time to Jasleen Matharu who is 37 years younger than him.

We started our investigation by searching on the internet with the appropriate keywords but didn’t find any credible media report confirming the news of the marriage of Anup Jalota with Jasleen Matharu.

We found the viral photograph on Jasleen’s Instagram account which she shared on October 8 without giving any caption. She just tagged Anup Jalota to this photograph. The photograph is viral on the internet after that day.

Vishvas News contacted Anup Jalota to know the truth behind the viral photo. Jalota told us: The viral image is from our upcoming film “Wo meri student hai”. In one of the scenes, I do Kanyadaan of Jasleen. As the bride’s father also wears turban during the wedding so I am also wearing it. The bride’s father and Groom’s father all wear a turban. People have just started cooking up stories about the photograph. The claim with the viral post is fake. The film is almost ready and nowadays we are busy with dubbing. The film will get released in February next year.

Social scanning of the Facebook page Syed Ikram Ul haq Hashmi Official revealed that the page has 3100 followers on Facebook.

Conclusion: The viral post is fake. Anup Jalota and Jasleen Matharu have not tied a knot. The viral image is from the sets of their upcoming film.