Fact Check: No, CBSE has not endorsed any private agency named VH Softwares for the conduct of online classes; viral message is fake

The viral message is fake. CBSE has not recommended any online examination by the software developed by V H Softwares. 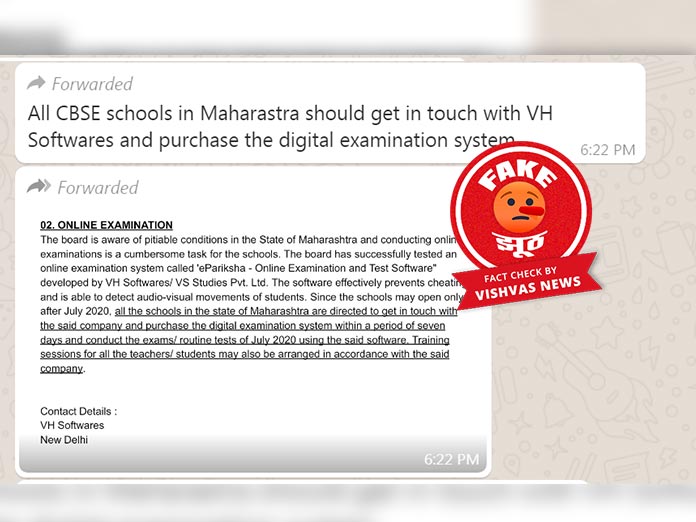 (New Delhi, Vishvas News): A viral notification claims that CBSE has endorsed a private agency named VH Softwares for the conduct of online classes. It further claims that all the schools in Maharastra should get in touch with this private company and purchase the digital examination system. Vishvas News investigated and found that the viral message is fake.

The message received on Vishvas News Whatsapp for fact check claims that the board is aware of the pitiable conditions in the state of Maharashtra and conducting the online examination is a cumbersome task for schools. The board has successfully tested an online examination system called ePariksha.The post further claims that the schools in the state of Maharashtra are directed to get in touch with the said company and purchase the digital examination system within a period of seven days and conduct the exams / routine tests using the said software. The contact details of VH Softwares New Delhi had been mentioned. The board referred in the viral message is CBSE board as per the claim which reads: CBSE board has asked schools to purchase the said material through VH Softwares.

CBSE has also shared a public advisory on its official website that reads: “CBSE has neither endorsed any private agency for the conduct of online classes nor recommended any for the conduct of online examination and there is no OSD (Academics) appointed in CBSE. VH Softwares / VS Studies Pvt. Ltd is fraudulently misleading schools to advance its agenda, make money, or to simply cause havoc. All the schools affiliated to CBSE are, therefore, advised to follow only the authentic information available at the official websites of CBSE i.e. www.cbse.nic.in and www.cbseacademic.in or sent through the official mails of respective Regional Officers and Centre of Excellence, E-Sandesh or the official IDs given at the website of CBSE under the tab ‘contacts’.”

On June 2, 2020, CBSE has released a notification on its website cbse.nic.in where it has answered some of the frequently asked questions related to CBSE examinations. The board has laid down special provisions for those students who have returned home and wish to appear from a different examination centre than their schools.  The notification mentions that the examinations would now be conducted in the respective schools of the candidates instead of the examination centre already allotted. CBSE will allow change of examination centre in respect of candidates who have shifted and are residing in some other district in the country than the place of their school.

It has nowhere been mentioned that the examinations or trainings would be conducted by a software manufactured by VH Softwares New Delhi.

Vishvas News searched the e-Pariksha system of the Central Board of Secondary Education (CBSE) on the website of CBSE. We found that it is a portal for online submission of list of candidates/ registration/LOC)
for X/XII-Examination 2020.

We searched about the company VH Softwares and found a Facebook page by the company name. We contacted the number given on its Facebook page and a person named Harsh Vardhan spoke to us. He said: “The message you are talking about is fake and is spread to hamper the name of our company. We have created a software named EPARIKSHA but it is not for CBSE. It is developed by our company. The software is for online examination but once again, it is not related to CBSE. Many schools have forwarded us the email and its header which reveals that someone from Kota, Rajasthan has sent such fake emails.”

Conclusion: The viral message is fake. CBSE has not recommended any online examination by the software developed by V H Softwares.