Fact Check: No, ‘Hindu’ word did not disappear from Maha secondary and Higher secondary religion columns

Maharashtra SSC Board exam application forms were not changed by the MVA government. The changes were made back in 2013 and the Hindu word was not dropped from the forms. 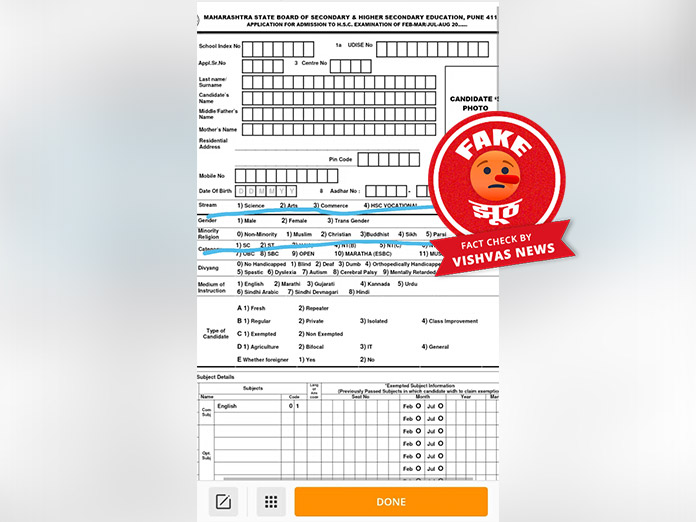 New Delhi (Vishvas News): All the social media platforms are a buzz with a screenshot of the form of admission to HSC examination, by Maharashtra Board of Secondary and Higher Secondary Education. It is being claimed through the post that the word, ‘Hindu’ has been dropped from the religion column and non-minority is being used now. It is claimed that the changed are being made by the MVA-led Maharashtra government. Vishvas News in its investigation found that the change in the form was made in the year 2013 and that it was implemented in the year 2014.

Vishvas News came across various claims on Facebook and Twitter, where the screenshot of the admission form was shared and the religion column was highlighted.

Twitter user François Gautier shared the screenshot and wrote: The word “Hindu” disappeared from the maharashtra secondary and higher secondary forms in the religion column… “Non Minority” was used instead of “Hindu”… This is a first, NO?

Other profiles too have shared the screenshot with similar claims.

We found an article carried on the website of Times of India on September 3, 2013. The article, ‘SSC, HSC pupils can mention minority status in exam forms’ said, “The decision was taken at the meeting held between state minorities minister Arif Naseem Khan and school education minister Rajendra Darda at Mantralaya on Monday. Students have the option of specifying their caste (SC/ST/OBC) in the current application system. But there is no such provision for candidates from minority communities.”

It was hence clear that the option ‘Hindu’ does not exist in the form since, 2013.

In the last step of investigation, Vishvas News contacted Tejrao Kale, Joint Secretary, Education Board, Amravati. He said that the form that we see on the website has been in place with the changes since 2014. The people who belong to the ‘open’ category should mark, non-minority in the religion, the Hindu word does not exist on the form and was not dropped recently.

Tejrao Kale also shared a picture of a notification dated, 03 December 2020 with Vishvas News, which was signed by the secretary, state board, Pune.

The notification was taken out by Maharashtra State Board of Secondary and Higher Secondary Education, Pune. It said, “The online form consists of Muslim, Christian, Buddhist, Sikh Parsi, Jain in the Minority Religion section. Along with it, the column, ‘non-minority’ exists in the form since 2014.”

Through the notification the board had appealed the schools to fill an online form for the examination.

In the last step of investigation, Vishvas News did a social background check on the user who shared the claim. François Gautier is a journalist, writer, museum builder. He has 64.2K followers while he follows 381.

Conclusion: Maharashtra SSC Board exam application forms were not changed by the MVA government. The changes were made back in 2013 and the Hindu word was not dropped from the forms.