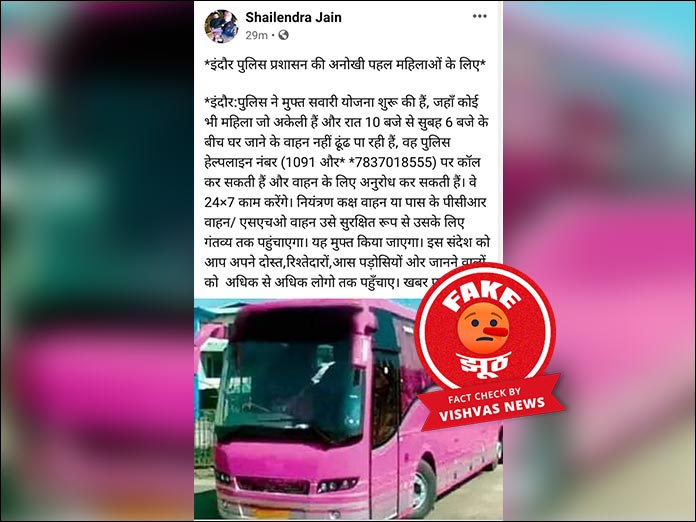 Vishvas News (New Delhi): A message falsely attributed to Indore Police is going viral on social media. It is claimed in the viral post that the Indore Police has launched a free ride scheme for women. In this, any woman can call the police helpline number to drop her home. The police car will drop the woman safely to her house.

Vishvas News investigated and found the viral post to be fake. Indore police has not started any such scheme.

Facebook user Shailendra Jain claimed in a post shared on March 12: ‘Indore Police Administration’s unique initiative for women… Police has launched free-ride scheme, where any woman who is alone and is unable to find a vehicle from 10 am to 6 am can call the police helpline number (1091 and 7837018555) and request for the vehicle. They will work 24 × 7. The control room vehicle or the nearby PCR vehicle / SHO vehicle will drop her safely to her destination. This will be free of charge. You should spread this message to more and more people, to your friends, relatives, neighbors, and acquaintances. Watch the news.”

Vishvas News called up the mobile number 7837018555 viral in the name of Indore Police. The one who received the call said that this number is the helpline number of Ludhiana.

We searched the mobile number 7837018555 on Google search. We found a report published on the website of Hindustan Times dated December 1, 2019. As per the report, the police started the night pick and drop service for women in Ludhiana. It was clear that the number is of Ludhiana and not of Indore.

Vishvas News contacted Indore Police on WhatsApp number 7049124445. They said that the viral post is fake.

We also contacted ASP (Headquarters) Manisha Pathak Soni. He told that this plan is for Ludhiana. At present, no such scheme is launched in Indore.

We scanned the profile of the Facebook user Shailendra Jain who shared the post and found that the user is based out of Indore, Madhya Pradesh. He created his profile in July 2013.

Conclusion: The viral message is falsely attributed to Indore police. No such pick and drop service is launched by Indore police.