Fact Check: No, Lowe’s is Not Offering $150 Coupon By Clicking on a link; Viral Post is Fake

No, Lowe’s isn’t offering $150 coupon by clicking on a link. The viral post is a scam. 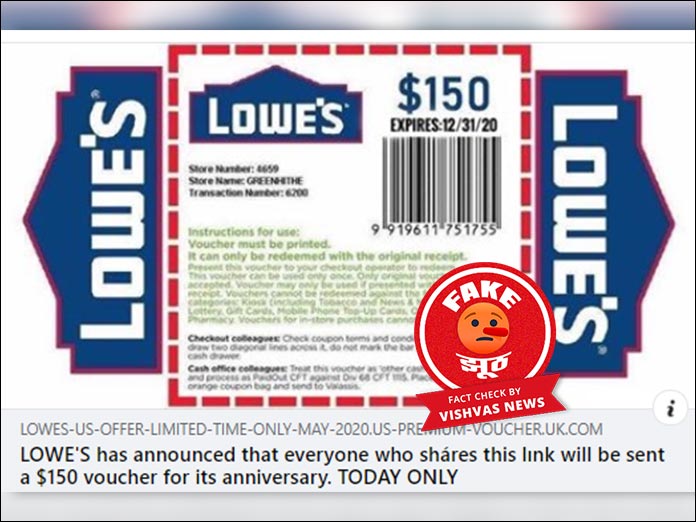 New Delhi (Vishvas News): A post going viral on social media claims that home improvement retailer Lowe’s is giving away a coupon worth $150 to those who share the link given in the post. Vishvas News investigated and found the offer in the post is fake and not affiliated in any way with Lowe’s. The viral post is fake.

A post shared on Facebook shows a link claiming: “Lowe’s has announced that everyone who shares this link will be sent a $150 coupon for its anniversary.” The link redirects to a website prompting users to answer a survey. The archived version of the post can be checked here.

Vishvas News also received the post on its Whatsapp Chatbot for fact checking.

Vishvas News investigated by clicking on the link mentioned in the viral post (We advise our readers not to click such suspicious links). The link redirected to a survey page that was not the official link of the company. The company’s official website is https://www.lowes.com/.

On the web page, there were a series of questions that were asked from the user and eventually require the user to share the link on Facebook. The viral post link claimed to offer $150 whereas the webpage shows the offer of $220 LOWE’S Coupon.

Vishvas News contacted Lowe’s company regarding the viral post. As per Lowe’s official statement: “This offer is not a valid coupon issued by Lowe’s. It is fake and not affiliated in any way with Lowe’s. As a rule of thumb, Lowe’s-authorized offers are primarily promoted on Lowe’s Companies Inc’s official website and verified social media accounts.”

We also visited the official website and social media handles of Lowe’s but didn’t find any such offer as claimed in the viral post.

The social scanning of the Facebook user who shared the fake post revealed that the user is based out of Wisconsin.

Conclusion: No, Lowe’s isn’t offering $150 coupon by clicking on a link. The viral post is a scam.