Fact Check: No, tea made of papaya leaves cannot cure cancer in 60 to 90 days 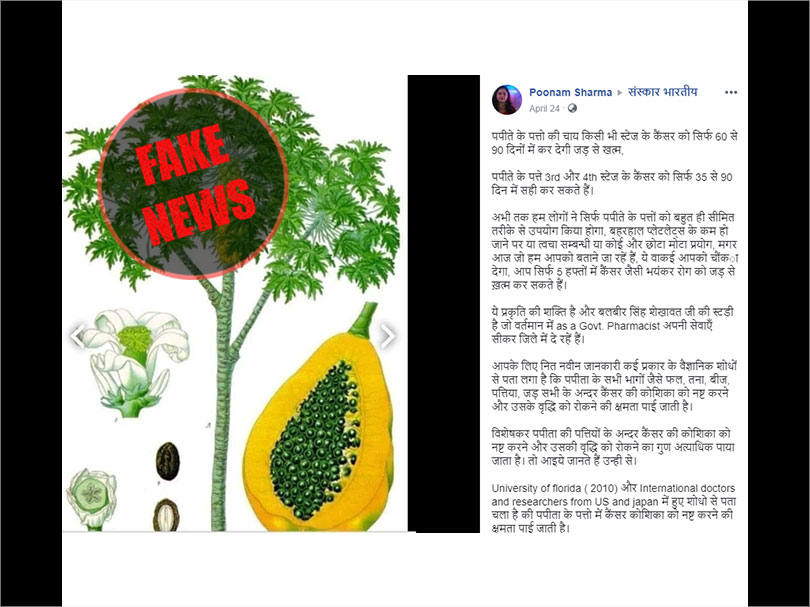 New Delhi, Vishvas Team: A Facebook post is getting viral claiming that the tea made from papaya leaves can completely cure cancer of any stage in 60 to 90 days. As per another claim in the same post, papaya leaves can cure stage 3 and stage 4 cancer in 35 to 90 days. The post also mentions about some researchers and their studies on the benefits of papaya leaves.

A fact check revealed that the claim is false. Tea made from papaya leaves cannot completely cure cancer of any stage in 60 to 90 days or stage 3 and stage 4 cancers in 35 to 90 days.

We contacted some doctors and asked whether they can validate the claim mentioned in the post and their responses were as follows:

Dr. Manish Singhal, Oncologist, Indraprastha, Apollo Hospital: A big NO…!! This is not possible at all.

Dr. Himanshu Verma, Ayurvedic Doctor: No, there is no such treatment.

As per the Facebook post (Screenshot given below), the first claimed is followed by the next statement which says that this it is the power of nature and is a study of Balbir Singh Shekhawat who is currently serving in Sikar district as a Govt. Pharmacist.

As per the Facebook post (Screenshot given below), the third claim states that as per research in the University of Florida (2010) and as per international doctors from the US and Japan it has been shown that papaya leaves have the potential to destroy the cancer cells. It has also been claimed that 10 types of cancers can be cured completely.

The fact check revealed that the post is misleading. Although there is a report by the University of Florida that papaya leaves have cancer-fighting properties but many claims mentioned in the Facebook post using the name of the university and the researchers are false.

We performed Google search and landed to a news article on the official website of the University of Florida.

In the report by the University of Florida, it has been stated that:

“Dang and his colleagues documented for the first time that papaya leaf extract boosts the production of key signaling molecules called Th1-type cytokines. This regulation of the immune system, in addition to papaya’s direct antitumor effect on various cancers, suggests possible therapeutic strategies that use the immune system to fight cancers.” In the report, nowhere it has been mentioned that cancers can be cured completely as stated in the Facebook post.

Claim 4: As per the Facebook post, the fourth claim states that according to Nam Dang, MD, Ph.D., who is a researcher, papaya leaves can cure cancer completely. It can cure 10 types of cancer.

Fact Check: The claim is misleading and twisted from the original study.

Investigation: Although the name of Dr. Nam Dang has been mentioned in the report of the University of Florida but nowhere in the report it was mentioned that it can cure 10 types of cancers.

The official report states: “Researchers exposed 10 different types of cancer cell cultures to four strengths of papaya leaf extract and measured the effect after 24 hours. Papaya slowed the growth of tumors in all the cultures.” Nowhere in the report it has been mentioned that papaya leaves can cure cancer completely in 10 days as mentioned in the Facebook post.

The report also stated: “In a similar analysis, the team also looked at the effect of papaya extract on the production of antitumor molecules known as cytokines. Papaya was shown to promote the production of Th1-type cytokines, important in the regulation of the immune system. For that reason, the study findings raise the possibility of future use of papaya extract components in immune-related conditions such as inflammation, autoimmune disease and some cancers.

Foremost among papaya’s health-promoting agents is papain, papaya’s signature enzyme, which is found in both the fruit and the leaves.

Aggarwal also noted that papaya extract’s success in reducing cancer in laboratory cell cultures must next be replicated in animal and human studies.”

This means, the experiment has been done on laboratory cell structures and will be replicated in animal and human studies.

As per the Facebook post (Screenshot given below), the fifth claim states that papaya tea is advisable to be taken till 3 weeks. It also claimed that the experiment will show the results in 5 weeks.

Fact Check: The claim is false.

We performed google search for any such recipe curing cancer in 5 weeks. We did not find any research or study supporting the claim. We also contacted renowned doctors and here is what they replied:

Dr. Sanjeev Kumar, C.S.C, D.C.H, M.B.B.S, General Physician: This is a false gimmick! Tea made of papaya leaves cannot cure cancer at all.

The tea made of papaya leaves cannot cure cancer in 60 to 90 days. The claim in the Facebook post is false.

How to protect yourself from Coronavirus? Download PDF and read important information on it