Fact Check: No, The Girl Didn’t Turn Into A Dog, Its An Art Installation 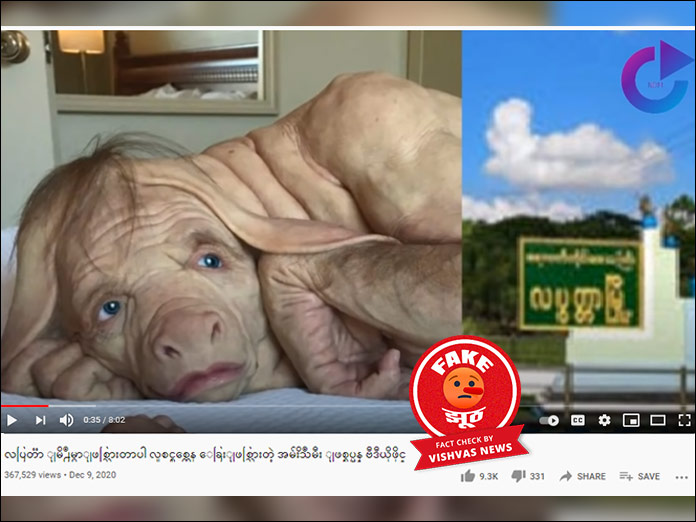 New Delhi (Vishvas News): A video shared on Youtube claims that a girl turned into a dog after insulting her parents. Vishvas News investigated and found the claim to be false. The girl didn’t turn into a dog, it is actually an art installation by an Australian artist.

The video shared on Youtube with the title in Burmese-language that translates in English states: “Video of a woman who turned from a real person into a dog in Labutta.”

The archived version of the video can be checked here.

While watching the video we saw that it shows a photo collage of a human-like creature. The video also shows a town entrance sign for Labutta. The voiceover in the Burmese language narrates the alleged story for 8 minutes.

The story narrates: “Her name was Ma Khin Hla and her age was about 16-17. She was a young Buddhist girl but her character is very wild and rude. She was an only child but had no respect for her parents. She was always yelling at her parents. Therefore, she had faced a very tragic event in her life. She complained to her parents for not cooking her dinner when they came back home from the monastery after their fasting. She abused her mother. Then she lost consciousness. When she regained consciousness, she no longer lived as a real person, but as a dog. Despite being human, she leaned on all fours like a dog.”

Vishvas News used the Invid tool to extract the screenshots of the video. We performed a Google reverse image search of the screenshot and found a report on the CBC website. The report mentioned an art installation by Australian artist Patricia Piccinini, published by Canadian broadcaster CBC News on September 25, 2018.

Vishvas News contacted Roger Moll, studio manager for Paccinini and he confirmed stating: “This is an Artwork by Patricia Piccinini titled ‘The Young Family’. The post is going viral with the fake claim.”

Conclusion: Vishvas News investigated and found the claim to be false. The girl didn’t turn into a dog, it is actually an art installation by an Australian artist.