Fact Check: No, This Company Isn’t Giving Away Mini Fridges for its 100th Anniversary; Viral Post Is A Scam

No, Pepsi isn’t giving away mini fridges for its 100th anniversary; the viral post is fake. 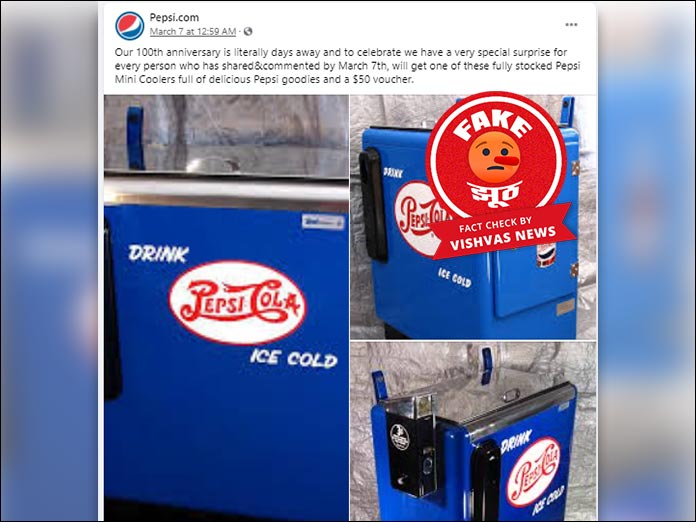 New Delhi (Vishvas News): A post going viral on social media claims that Pepsi is giving away mini fridges on its 100th Anniversary. Vishvas News investigated and found the viral post to be fake. The viral message is not a genuine giveaway from Pepsi.

A post shared on Facebook by a page named Pepsi.com claims that Pepsi is giving away mini coolers full of Pepsi goodies and a $50 voucher. The users are asked to share and comment on the viral post to avail the offer. The archived version of the post can be checked here.

Vishvas News investigated by searching regarding the offer as claimed in the viral post.

Neither on the company’s official website nor on its social media pages could we find any such offer.

We contacted Pepsico through email. As per the response we received from Mridula, Consumer Relations Executive – PepsiCo India: “We would like to inform you that PepsiCo does not organize any consumer promotion with cash. There are a lot of fraud emails / SMS in circulation and numerous schemes and promotions that unscrupulous elements use for illegal gains and/or maligning the image of the company and in defrauding the public. These schemes generally include fake advertising without any disclosure about themselves; altering the terms of genuine schemes, creating fictitious names and entities and forging signatures. This viral post looks like one. We would also caution you not to share any details as has been mentioned in the post, as your details can be misused.”

We also contacted Pepsico on Twitter and received a similar response: “this is not a legitimate promotion and did not come from a member of our team.”

The viral post is shared on a page named Pepsi.com. When we scanned the page we found that the page is created on March 7, 2021. This page not affiliated with PepsiCo.

PepsiCo was founded in 1965. This means it isn’t the 100th anniversary of the company.

Conclusion: No, Pepsi isn’t giving away mini fridges for its 100th anniversary; the viral post is fake.