Fact Check: No, This Machine Cannot Cure A Disease in 2.5 Minutes; Viral Images Are Taken From A 2013 Movie

Viral images of a machine cannot cure a disease in 2.5 minutes; the images are taken from a 2013 movie. 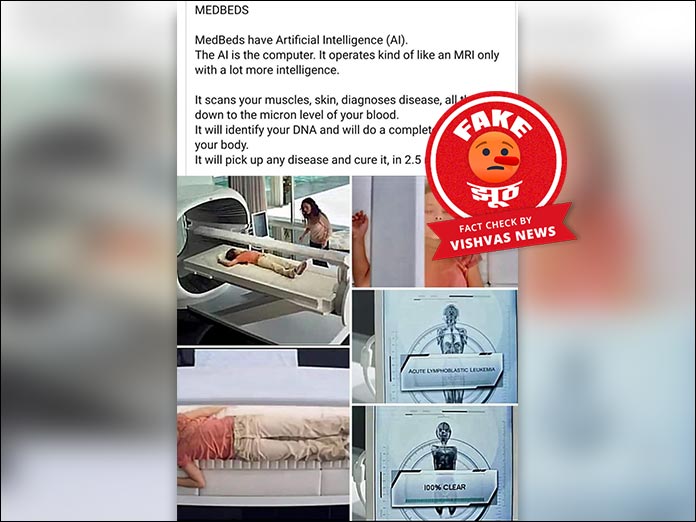 New Delhi (Vishvas News): A post doing rounds on social media shows images of MedBeds, a type of body scanner. As per the claim, Medbeds can pick up any disease and cure it, in 2.5 minutes. It further claims that Medbeds works on Artificial Intelligence and works will a lot of intelligence.
When Vishvas News investigated we found that the images shown in the viral post are taken from a 2013 movie “Elysium”. Also, no body scanner, so far, can cure a disease under 2.5 minutes as claimed in the post.

The viral post shows some images showing a girl lying in a body scanner similar to an MRI machine. As per the claim “Medbeds scan your muscles, skin, diagnose disease, all the way down to the micron level of your blood” and “pick up any disease and cure it, in 2.5 minutes.”

Vishvas News also received the post for fact check on its Whatsapp chatbot.

When Vishvas News performed Google Reverse Image Search of the viral photos we found that the photos are taken from a 2013 Sci-fi movie “Elysium”. The photos shared in the viral post can be seen in the movie trailer on Youtube:

In the film, the wealthy people have access to MedBays that are scanners capable of identifying and curing any disease. This is what has been claimed in the viral post as well.

We further searched on Google using the ’MedBed’ keywords and found a research paper on the topic ‘MedBed: Smart medical bed’.

As per the paper citing the publisher as IEEE, a smart digital medical bed called MedBed is devised to solve the most challenging and relevant problems in an efficient manner from time, space, and economical perspectives. The ultimate objective is to provide patients a certain independency thus, allowing them to take some vital actions when nurses are late or unavailable.

However, this device doesn’t state that it can cure any disease in 2.5 minutes.

According to Dr. Nikhil, a critical care specialist from Apollo hospitals, Delhi, there wouldn’t be a need for doctors if a machine can detect and cure a disease in 2.5 minutes. This type of machine as stated in the viral post does not exist.

Conclusion: Viral images of a machine cannot cure a disease in 2.5 minutes; the images are taken from a 2013 movie.