Fact Check-No, This OTT Platform Has Not Removed All Christian Films, Viral Post Is Fake

No, this OTT platform hasn’t removed all Christian films. The viral post is fake. 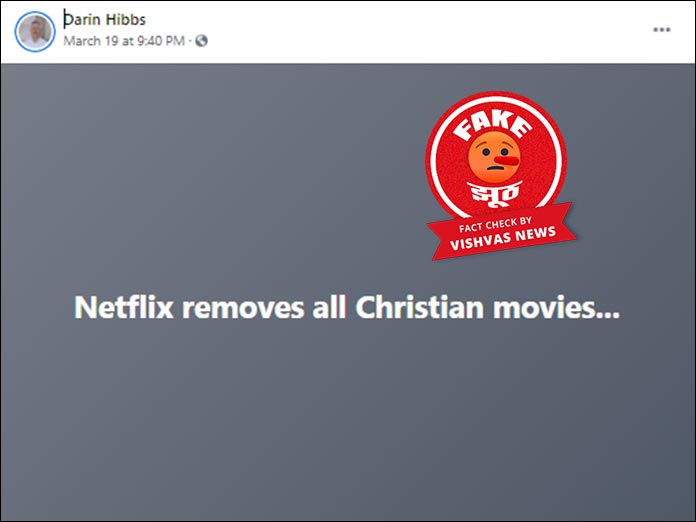 New Delhi (Vishvas News): A post doing rounds on social media claims that Netflix has removed all Christian films. When Vishvas News investigated, we found the post to be fake.

We searched the word “Christian” on Netflix. There (here) turns up several faith-based titles including“The Gospel of Matthew” (2014), “The Young Messiah” (2016), “Soul Surfer” (2011), etc. These can be viewed by clicking here.

Vishvas News contacted Netflix and spoke to Ashish from the customer care department. He said: “Netflix has not removed Christian titles from its streaming platform, nor does it plan to.” He also said that: “Do not believe in such posts, these are totally fake.”

We visited the official website of Netflix. We did not find any such notification as stated in the viral post.

Vishvas News scanned the profile of the user named Darin Hibbs who shared the viral post. The user hasn’t entered his details into his account.

Conclusion: No, this OTT platform hasn’t removed all Christian films. The viral post is fake.