Fact Check: No, this picture is not of bullet trains in Gujarat

Viral image that shows multiple bullet trains is not from Gujarat but is from Wuhan in China. The viral claim is false. 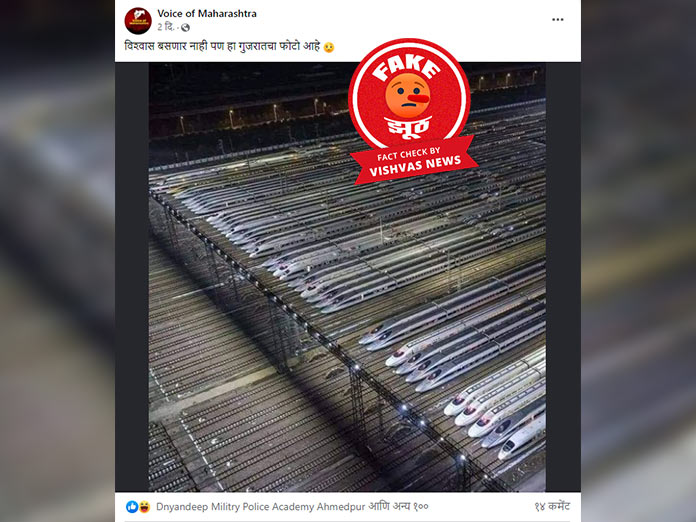 Translation: One wouldn’t believe but this is a picture from Gujarat.

Vishvas News started investigating the claim by searching this picture through Google Lens.

We first found this picture on a Facebook page called, ‘Civil Engineering Discoveries‘. The caption of the picture said that the image is from China.

We further investigated and found a tweet which said that the picture is that of High-speed trains waiting to be maintained in Wuhan.

The source led us to the original image posted on Getty images, a stock images website.

We also found a similar image on alamy.com, a stock images website. The caption of the image read: High-speed trains wait to set off at the Wuhan Railway Station in Wuhan, central China’s Hubei Province. The Spring Festival Travel Rush started on February 1st, 2018, in China.

Vishvas News also found a video uploaded on the YouTube channel, ‘New China TV’. The caption of the video read: The aerial view of the largest high-speed train maintenance base in Central China.

Vishvas News searched for news regarding the bullet trains in Gujarat. We found that L&T construction plans to build the Sabarmati depot in Gujarat.

Even though bullet trains have been introduced in India, the viral picture is not from Gujarat.

In the next step of the investigation, Vishvas News contacted Gujarat’s ANI correspondent, Suresh Parekh, who confirmed that the picture being shared was not from Gujarat.

We connected with a businessman Andy from Wuhan, China. He confirmed that the image is from Wuhan’s high speed train maintenance base, which is approximately 5 kms from his residence in Wuhan.

In the last step of investigation, we did a social background check of the user who shared the post. We found that ‘Voice of Maharashtra’ has 12K followers.

Conclusion: Viral image that shows multiple bullet trains is not from Gujarat but is from Wuhan in China. The viral claim is false.