This Pizza Outlet Isn’t Giving 3 Free Pizzas In Its 58th Anniversary. Viral post is a scam. 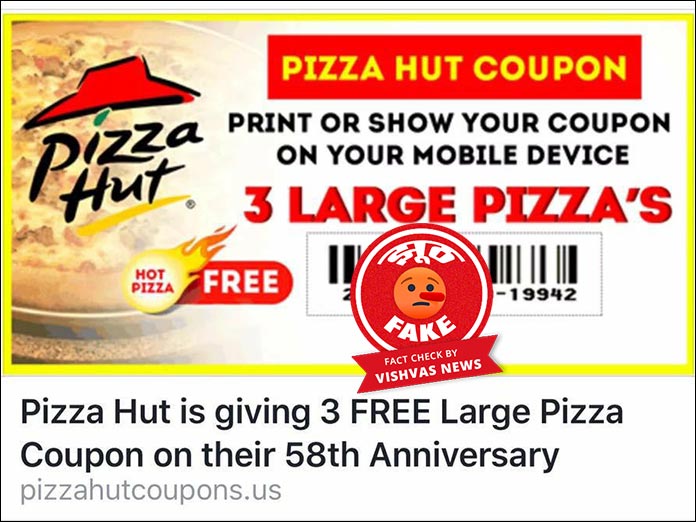 New Delhi (Vishvas News): A post received by Vishvas News on its Whatsapp Chatbot claims that Pizza Hut is giving 3 free large pizzas on its 58th Anniversary. A link is also given in the post.

When Vishvas News investigated we found the post to be fake. The link to the website was dubious and Pizza hut is not rolling out this office currently. Any valid offer would be hosted on an official Pizza Hut channel.

A post shared on Vishvas News Whatsapp Chatbot reads: “Pizza Hut is giving 3 FREE Large Pizza Coupon on their 58th Anniversary.” The link along with the post is pizzahutcoupons.us

Vishvas News investigated and found a Facebook post on the official account of Pizza Hut. Pizza Hut had addressed a previous flood of customer queries on their Facebook wall during a similar scam in May 2016.

We clicked on the link but the website yielded an error: “This site can’t be reached.”

The official website of Pizza Hut is Pizzahut.com and not
pizzahutcoupons.us.

We spoke to Chandra, Customer Care official of Pizza Hut and he denied any such promotion and also shared that the website mentioned in the viral post is fake.

Cybersecurity expert Ayush Bhardwaj suggested to us that the control of malware accessed in your mobile can be achieved with such clickbait. Personal information can be stolen and sold on the Dark Web (hackers and cyber fraudsters use the Dark Web).