MLA Mukesh Verma left BJP in January 2022. The viral claim stating he did so recently is misleading. Old news of him leaving the party is going viral with misleading claims. 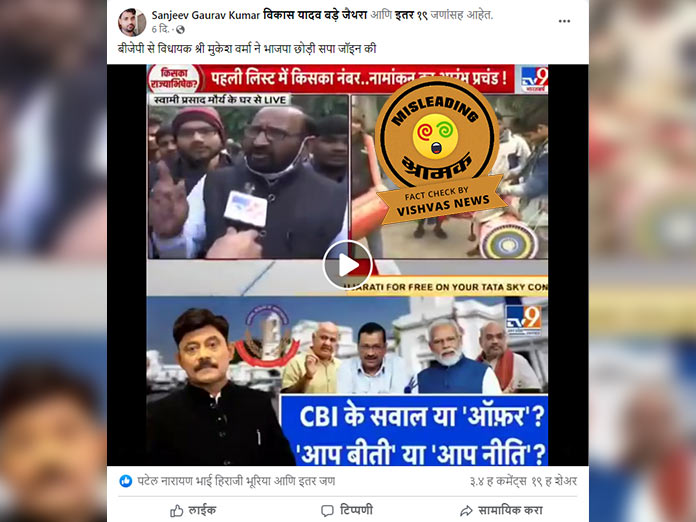 Vishvas News started its investigation with a keyword search.
We found the same news clip on the Facebook page of TV9 Bharatvarsh.

We also found the viral clip on the official YouTube channel of TV9 Bharavarsh which has 12.2 mn subscribers. The video posted on January 14, 2022 had over 32 lakh views.

We also checked for news reports about leader Mukesh Verma leaving BJP on the internet.

We found a report on Hindustan Times published on January 13, 2022, titled, “UP election: Another jolt to BJP as MLA Mukesh Verma quits party”

The report said: Uttar Pradesh lawmaker Mukesh Verma became the seventh Bharatiya Janata Party (BJP) MLA to quit the party days ahead of the Assembly elections. After resigning from the primary membership of the BJP, Verma showed his support to Swami Prasad Maurya, a prominent backward caste leader who resigned from the state cabinet earlier this week.

In the next step of investigation, Vishvas News spoke to BJP national spokesperson Dr Guruprakash Paswan. He said, “The viral claim of Mukesh Verma quitting BJP is misleading. He quit BJP from Shikohabad in UP, in January 2022, and it did not happen recently. BJP is a party which is indeed a family and people who quit the party have returned in the past too. No such thing has happened recently.“

In the last step of investigation, Vishvas News did a social background check of user who shared the viral post. Sanjeev Gaurav Kumar has 1.6K friends on Facebook and belongs to Jaithra, Uttar Pradesh.

Conclusion: MLA Mukesh Verma left BJP in January 2022. The viral claim stating he did so recently is misleading. Old news of him leaving the party is going viral with misleading claims.