Fact Check: Old picture of a damaged school in Gaza viral in the name of Afghanistan

Vishvas News in its investigation found that this claim is false. The viral picture is of Gaza, not Afghanistan. 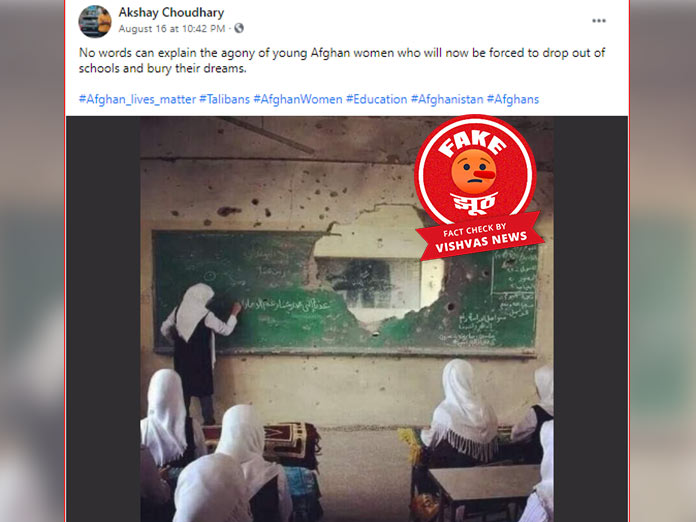 New Delhi (Vishvas News). Following the Taliban’s control over Afghanistan, a picture is going viral on social media where a female teacher can be seen teaching some girl students inside a damaged school. It is being claimed with the post that this is a recent picture of Afghanistan. Vishvas News in its investigation found that this claim is false. The viral picture is of Gaza, not Afghanistan.

Sharing this post, a social media user named Akshay Choudhary claimed, “No words can explain the agony of young Afghan women who will now be forced to drop out of schools and bury their dreams. #Afghan_lives_matter #Talibans #AfghanWomen #Education #Afghanistan #Afghans”

To check this post, Vishvas News did a reverse image search of this image. We could not find this exact picture but did find other pictures of the same classroom. We found a picture of this classroom in middleeastobserver.org/. The similarity between the two classrooms can be seen in the collage below. According to this news, the picture is of Gaza. This news was filed on 28 August 2016.

We also found a picture of the same classroom at www.gettyimages.co.uk. The description read “A Palestinian man inspects the heavily damaged Sobhi Abu Karsh school in Gaza City’s al-Shejaea neighborhood on August 5, 2014, as a 72-hour humanitarian truce went into effect in the Gaza Strip after a month of fighting between Hamas and Israeli forces. Hamas may have hemorrhaged rockets and fighters, but its latest war with Israel has boosted its popularity in the Gaza Strip even if long-term gains look remote, analysts say. AFP PHOTO/ MOHAMMED (Photo credit should read MOHAMMED ABED/AFP via Getty Images)”

According to a news in indiatoday.in “Taliban’s Acting Higher Education Minister Abdul Baki Haqqani said on Sunday that women would be allowed to study in universities but co-education would be banned.

This picture was shared by a Facebook user named Akshay Choudhary with the wrong claim. The user has 547 followers.

Conclusion: Vishvas News in its investigation found that this claim is false. The viral picture is of Gaza, not Afghanistan.