Fact Check: Old Picture of Attack on Policeman in Kanpur Passed off As Incident from Bengal 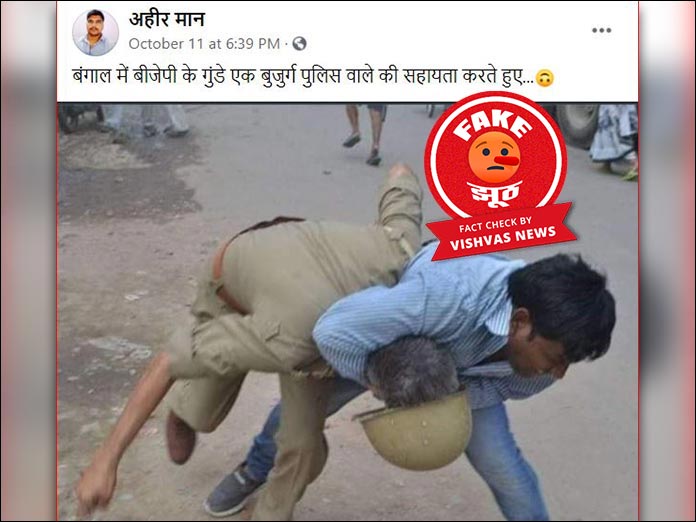 New Delhi (Vishvas News): A picture going viral on Facebook shows a young man brutally attacking a policeman. Some users are referring to the young man as BJP supporter from West Bengal.

Vishvas News investigated the viral post and found that the picture has no relation with West Bengal. In fact, the viral picture is from Kanpur, Uttar Pradesh. In 2017, a group of people gathered in the streets expressing their anger after a minor was allegedly raped in a hospital. Another picture of the same incident had gone viral earlier with fake claims. You can read the story here.

The image showed a young man grabbing a policeman by the neck. We searched the image using the Google Reverse Image Tool.

We found the picture on a website named The Sun. The report stated that the image is of an incident that happened in Kanpur, Uttar Pradesh on June 21, 2017, when some angry group of people gathered in front of the hospital where a minor was allegedly raped in the hospital’s ICU.

During the investigation, we also found news on the website inextlive.com. The report mentioned an incident that happened on June 17, 2017, when some people gathered in front of New Jagriti Hospital in Kanpur. The crowd gathered in front of Barra’s New Jagriti Hospital and then pelted stones at the hospital. Policemen were trying to calm the situation as per the report. Read the complete report here.

We scanned the profile of the user who shared the viral claim. We found that the user is based out of Delhi.

Conclusion: The old picture of an incident in Kanpur is passed off as that of Bengal. We found the picture on a website named The Sun. The report stated that the image is of an incident that happened in Kanpur, Uttar Pradesh on June 21, 2017 when some angry group of people gathered in from of the hospital when a minor was raped in the ICU of a hospital.