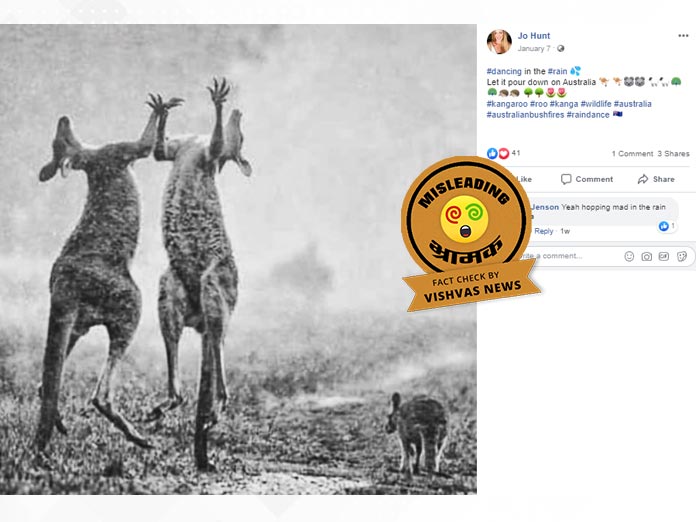 A viral post on social media shows a photo of two kangaroos jumping with the arms raised and looking towards the sky. The post was shared on January 7, 2020, alongside a caption which depicts that the kangaroos were dancing after rain fell during the recent bushfires in Australia. Vishvas News investigated and found that the viral post has been shared with a misleading context. The image was shared on January 7, 2020, referring it to be taken during the recent bushfires in Australia whereas the actual image was taken in 2014 by an Australian nature photographer Charles Davis and was unrelated to the recent bushfires.

A viral post on social media shared by a user named Jo Hunt on January 7, 2020 shows a photo of two kangaroos jumping with the arms raised and looking towards the sky. The text alongside the photo reads: #dancing in the #rain Let it pour down on Australia. #kangaroo #roo #kanga #wildlife #australia #australianbushfires #raindance. Here is the archived version of the post.

When Vishvas News started its investigation we found that the post is shared across social media with various claims. We performed Google Reverse Image Search of the viral photo and found the same photo on the website of a photographer Charles Davis. Here is the screenshot of the page where the image was found on the website of photographer Charles Davis:

We further searched and found the same image on the Facebook page of Charles Davis Photography. The image was shared on May 14, 2017 stating that the image was an award-winning one. The caption reads: “Praise to the Rain, this was my first big award winning shot taking out the 2014 ANZANG black and white wildlife photographer of the year award. When people what are favourite images this one always comes to mind. It took a few hours of sitting in the rain to get this photo and I still can’t believe it came together, I love the symmetry between the two large Roos, it’s nearly perfect.”

Vishvas News contacted the photographer Charles Davis through an e-mail asking whether the photo was clicked by him and whether it is related to the recent Australian Bushfires. He replied that the photo is clicked by him but it has nothing to do with the recent fires. The photo is from 2014. There have been rains in some part in Australia recently but the fires are not very much out. Here is the screenshot of his email:

The photographer also issued a clarification in his Instagram post dated January 14, 2020 which reads: It really annoys me that I even have to post this while everything around my home is still burning. This photo, my photo has been used to post lies all over social media for the last two weeks. People are posting it saying (someone captured these kangaroos celebrating the rains that are putting out the fires in Australia). Firstly I took this photo in 2014. These kangaroos are more than likely ash now and definitely aren’t celebrating anything. I can say first hand there has been bugger all rain and everything is still very much burning. If you see you anyone posting this photo with bullshit lies like this please set them straight. It’s bad enough to have your work stolen but to have it used to promote lies for others social media ego stroking is not cool.” Here is the screenshot of his Instagram post:

As per recent news reports, it did rain in some parts in Australia around January 7, 2020 when the viral post was shared but it wasn’t enough to extinguish the massive fires. Here is the screenshot of the news report:

Vishvas News has debunked a fake post related to recent Australian bushfires earlier as well. The article in published in Hindi language. Here is the screenshot of the debunked post:

Conclusion: The viral post showing a photo of two kangaroos jumping with the arms raised and looking towards the sky is shared with a misleading content depicting that the kangaroos were dancing after rain fell during the recent bushfires in Australia. The viral post was shared on January 7, 2020 however the original image was clicking in 2014 by an Australian nature photographer Charles Davis and was unrelated to the recent bushfires.