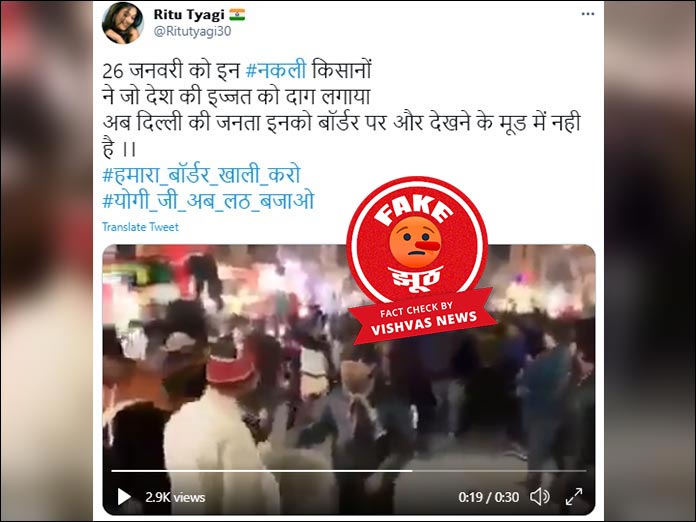 New Delhi (Vishvas News): A video going viral on social media shows some people raising slogans in support of Delhi Police. In the video, people can be heard saying “Modi ji play the baton, Delhi Police play the baton we are with you.” Along with the video, it is being claimed that the video is recent and the people of Delhi are supporting the Delhi Police after the clash between the police and agitating farmers in Delhi on January 26.

Vishvas News investigated and found the claim to be fake. This video is available on the internet since 2019. It has nothing to do with the farmers movement.

A user named @ Ritutyagi30 shared a post on Twitter with a claim that reads, “On January 26, these fake farmers stole the nation’s reputation, Delhi people are no longer in the mood to see them on the borders.” #OurBorderBhaliKaro #YogijiAbalath_Bajo “

The archived link to the post can be seen here.

We extracted the screengrabs of the video with the help of the INVID tool and then searched them using Google reverse image search. We found this video in a report published in lokmatnews.in on December 27, 2019. The report was headlined, “Modi ji play the baton we are with you”, these slogans were raised in a Haryana rally, BJP leader shared this.” The report said that the video was tweeted by a BJP politician Jawahar Yadav on December 27, 2019 during the CAA protests.

We also found this video in a tweet made by Jawahar Yadav. The description in the tweet read: “Haryana’s rally is slightly different from the rallies in the country. Modi ji, you play the baton, we are with you.”

We also found this video on YouTube channel named Hello Uttarakhand News. The description read, “CAA, NRC: Slogans of ‘Delhi Police play the baton we are with you, video viral ..”

For further confirmation on this video, we contacted the Delhi correspondent of Dainik Jagran Rakesh Singh. He told us, “This video has been viral since 2019. I cannot confirm this place, but at that time it was also made viral with a claim that it was from Delhi or Haryana. This video is not recent.”

We cannot independently confirm when and where the video is actually from. But it is clear that the video has been available on the Internet since 2019.

Social scanning of the account of Twitter user @ Ritutyagi30 who shared the viral claim revealed that the profile has 3,112 followers.

Conclusion: Vishvas News investigated and found the claim to be fake. This video is available on the internet since 2019. It has nothing to do with the farmers movement.