Fact Check: Old video from Bangladesh viral in the name of West Bengal with fake claims 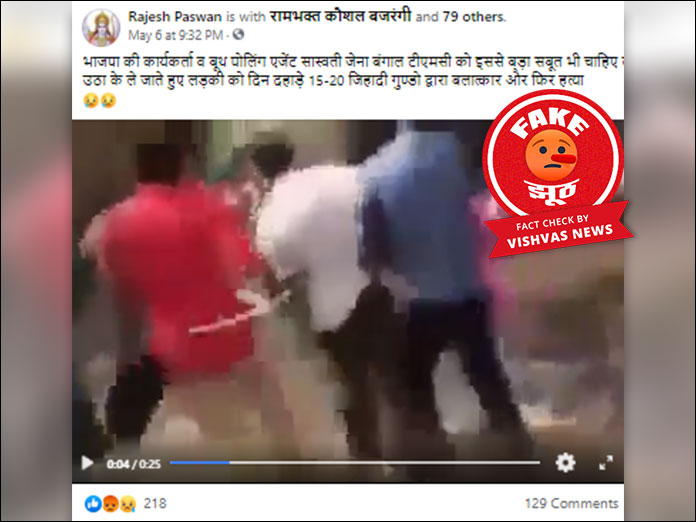 Vishvas News (New Delhi): A video is going viral on social media in which a woman can be seen protesting and shouting as she is being carried away by a few men. Users are posting this video with the claim that this happened in West Bengal. Vishvas News investigated and found the viral claim to be fake. The viral video is from Bangladesh.

Facebook user Rajesh Paswan shared this video on Facebook on May 6, 2021, and wrote in the caption, “(Translated) BJP worker and booth polling agent. The Bengal TMC now needs a greater proof that the girl was raped and murdered by the 15-20 jihadi goons in broad daylight.”

When we searched the keyframes of this video on Google reverse image, we found a longer version of this video on the timeline of a Bangladeshi Facebook user named ‘রহমত আলী হেলালী’. According to the description written with this post uploaded on 27 April 2021, the woman seen in the video was a Hindu who had married a Muslim man. The woman was forcibly handed over to her Hindu parents by the locals with the help of the police, to which she protested. The incident took place at Daulat Khan in Bhola, Bangladesh. The woman can be seen protesting in the video. Our Bangla translator told us that the woman in the video is saying that she does not want to go to her parents and wants to be with her husband. “

Taking a hint from here, we searched on the internet with keywords. We found news in this matter on dainikamadershomoy.com. According to the news, the woman is a Hindu who married a Muslim man and converted to Islam. When her father came to know, he filed a written complaint about the case under the Kidnapping and Prevention of Women and Child Harassment Act. The woman was ‘rescued’ by the local police and handed over to her family. The case was registered in Bhola, Daulat Khan in Bangladesh.

In this case, more details can be read on Dhaka Post as well.

To confirm this, we contacted Rahmat Ali Hali, a senior journalist from Bangladesh and founder of a Bangladeshi news outlet named Zakigonj Songabad, and shared this video with him. He confirmed that this video is from Bangladesh.

According to a news published on May 6 on Dainik Jagran’s website, “The violence that has been continuing since the Assembly election results in Bengal is not taking a halt. The state BJP on Thursday claimed that two more of its cadres have been brutally murdered in the last 24 hours. Apart from this, BJP workers and their homes have also been attacked in various places of the state.”

Conclusion: Vishvas News investigated and found the viral post to be fake. The viral video is old and is from Bangladesh.

This fact check has been published under Ekta Consortium (A collaboration of six fact-checking organisations in India.)