Fact Check: Old Video Of Couple Setting Themselves On Fire In Mathura Viral With Misleading Claim 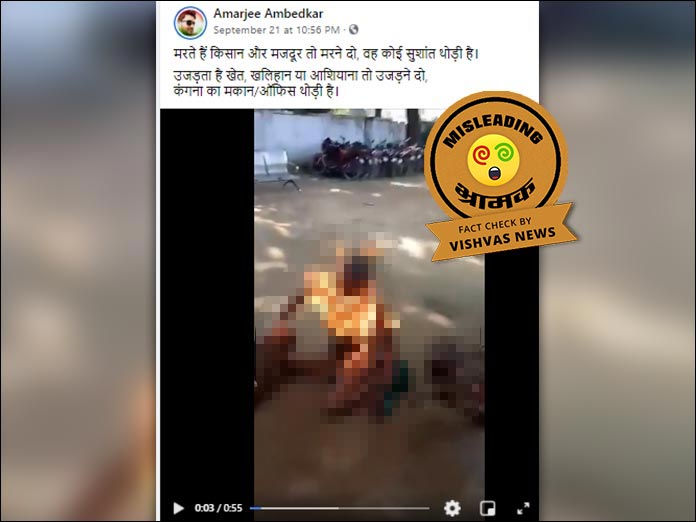 New Delhi (Vishvas News): A video doing rounds on social media shows a man and a woman setting themselves on fire. The claim alongside the video: “Let the farmers and laborers die, they are not Sushant. Desolate the farm or the house, this isn’t Kangana’s house or office.” The post is shared as recent and is being linked to the farmer’s problem.

Vishvas News investigated and found the claim to be misleading. The man and the woman shown in the video are the couple and they’ve set themselves on fire in a police station in Mathura. The couple reportedly set themselves on fire alleging inaction by the police over their complaint that some village strongmen were harassing them. The incident was of 2019.

In the viral post, the claim read: ” Let the farmers and laborers die, they are not Sushant. Desolate the farm or the house, this isn’t Kangana’s house or office.”

The archived version of this viral post can be seen here.

Vishvas News started its investigation by searching the video using InVID tool. When we searched the keyframes using Google reverse image, we found a news report from NDTV. The same video as viral was embedded in the news report published on August 29, 2019. As per the news report, the incident was reported in Mathura, Uttar Pradesh. According to the report, the couple reportedly set themselves on fire on August 28, 2019 alleging inaction by the police over their complaint that some village strongmen were harassing them.

Jagran.com also covered the news. According to Jagran.com’s report, the couple set themselves on fire in the police compound on August 28, 2019 alleging inaction by the police over their complaint.

Vishvas News spoke to Gaurav Grover, Superintendent of Police, Mathura regarding the incident. He said, “The event is of 2019. The case started on a dispute regarding drainage outside the couple’s house. The case has no relation with farmers. The woman’s medical was also done, but even then the report was not recorded. Both of them set themselves on fire inside the Surir police station compound. The man was later admitted to Safdarjung, Delhi, where both died. Outpost in-charge Deepak Nagar was suspended with immediate effect regarding this incident. The case is ongoing. “

This post was shared by a user named Amarjee Ambedkar. When we scanned the profile of the user we found that the user has a total of 2,495 followers.

Conclusion: In Vishvas News investigation, the post was found to be misleading. Both the man and the woman had set themselves on fire sue to inaction by the police over their complaint. The reason for the incident was not related to the farmers’ problem.