Viral video of clash between political workers being shared as that of Gujarat is old video from Jangao town in Telangana. 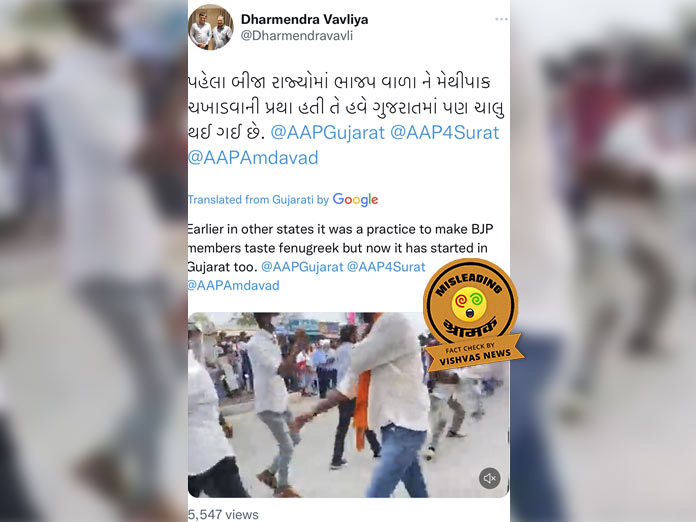 Translation: Earlier in other states it was a practice to make BJP members taste fenugreek, now it continues in Gujarat as well

Vishvas News started its investigation by checking the comments on the viral post.

Many users had commented that this video was not from Gujarat.

Vishvas News then uploaded the video in InVid tool and extracted screengrabs.

We zoomed into a few screengrabs and observed a few things. The boards on the shops were in a south Indian language and also one can clearly read ‘Jangaon Traffic Police’ in the video on a police stop.

The pink coloured flags in the video suggest that the people are workers of Telangana Rashtra Samithi (TRS). It was hence clear that the video was from Telangana.

After searching through appropriate keywords, we found a YouTube video uploaded on OneIndia News on February 10, 2022. The description said, “Clashes broke out between the TRS and BJP in the state of Telangana after there was a call for an Anti-Modi protest against the Prime Minister.”

This YouTube video was exactly similar to the viral video.

In the next step of investigation, Vishvas News reached out to a journalist who covers Telangana, Rahul Devulapalli. He confirmed that the viral video was old and was from Jangaon town, Telangana.

In the last step of investigation Vishvas News conducted a social background check on the social media user who shared the viral video. We found out that Dharmendra Vavliya is from Surat, Gujarat and belongs to a political party. He joined Twitter in January 2021.

Conclusion: Viral video of clash between political workers being shared as that of Gujarat is old video from Jangao town in Telangana.