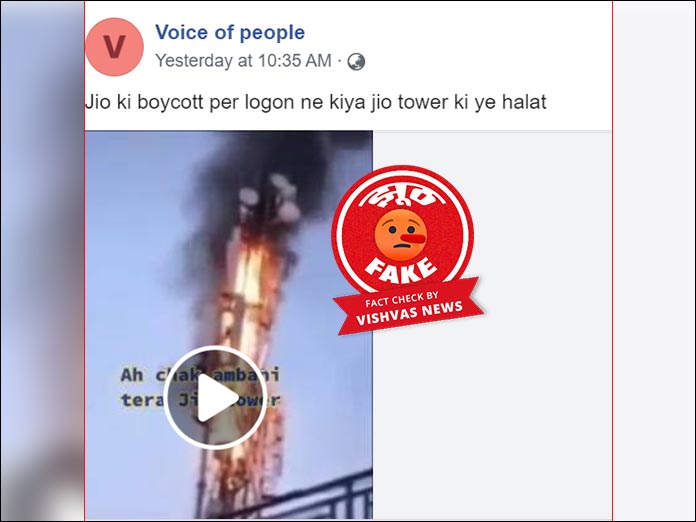 New Delhi (Vishvas News). Amid the ongoing farmers protest on Delhi borders, several fake claims about Adani Railway, and JIO food grain  sacks are all over the Internet recently. A video of a burning mobile tower is shared with a claim that farmers had set fire on it to boycott Reliance JIO.

Vishvas News investigation revealed the claim is fake. An old incident in Dehradun is now viral with fake claims.

Facebook page Voice of people uploaded a video on December 30 claiming that farmers burnt Reliance JIO’s mobile tower. The archived version of the Facebook post can be seen here.

We observed the video carefully and identified Tik Tok on its left top corner. Tiktok has been banned long before the farmers movement in the country and we could confirm the viral video is old and has is not related to ongoing farmers protest.

We uploaded the video to InVID tool and extracted keyframes to search on the Internet using Google reverse image tool. We found some pictures on Amar Ujala website posted on 28 June 2017 with a news article clarifying the incident has happened in Dehradun where the mobile tower on the roof of a residential home suddenly caught fire.

We could observe similarities between the viral video and the original video posted by News18.

Vishvas News contacted Sunil Negi, in-charge of Dainik Jagran’s online state desk in Dehradun. Sharing to us a news clipping of an article about the incident published by the Dainik Jagran in June 2017, he confirmed to us that the incident captured in the viral video is very old. “A mobile tower on the roof of a residential house in Ankitapuram Colony accidently caught fire,” said Negi.

Social scanning of the FB page that shared the viral post revealed that it was created recently on 15 December.

Conclusion: The viral post is fake. The old video of burning mobile tower is viral with fake claims.