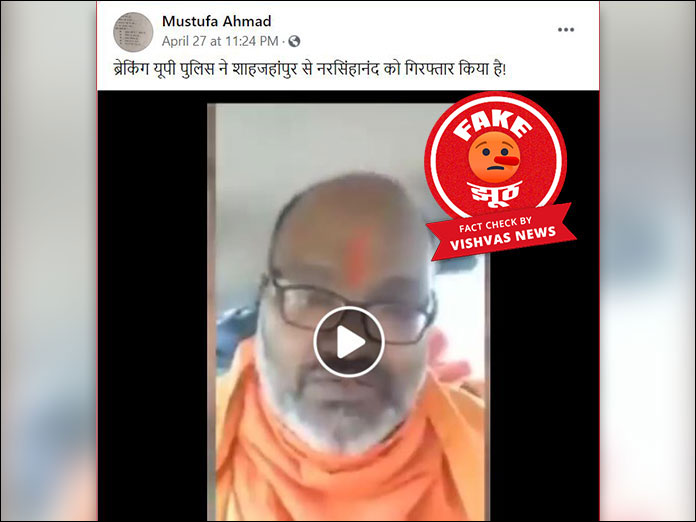 Vishvas News (New Delhi): A video about Yati Narasimhanand Saraswati is going viral on social media. In the video, he can be seen sitting in a police van. Users are claiming that the UP police has arrested Narasimhanand from Shahjahanpur.

Vishvas News investigated and found the viral post to be fake. The viral video of Yeti Narasimhanand Saraswati is old. He has not been arrested by the UP Police.

In the viral video, Yeti Narasimhanand Saraswati can be seen referring to Shahjahanpur. When we started searching for the original version of this viral video, we found the original video on a YouTube channel. It was uploaded on July 31, 2020. In this 4:29 minute video, Yeti Narasimhanand Saraswati can be heard saying that while he was going from Shahjahanpur to Ayodhya, he was arrested by the police. A 41-second viral video has been created by editing clips from different parts of the same video. It is now going viral with fake claims. The full video can be viewed by clicking here.

During the investigation, we also found a news on Dainik Jagran’s website. On July 30, 2020, it was reported in the news that the National Convener of Akhil Bhartiya Sant Parishad, Yati Narasimhanand Saraswati Maharaj, went to protest against the participation of Bhumi Pujan celebrations of Faiz, a resident of Chhattisgarh, belonging to the Rashtriya Muslim Manch and was accompanied by his disciples in Shahjahanpur. He was taken in custody and sent to Ghaziabad. Read the full news here.

Vishvas News contacted Anil Yadav, an associate of Narasimhanand Saraswati. He told that the viral video is old. Their owner is safe. They were not arrested. A particular community is making old video viral with a fake claim.

We scanned the profile of the Facebook user Mustafa Ahmed who shared the viral post. We found that the profile had been created in October 2019 and is followed by 2329 people.

Conclusion: Vishvas News investigated and found the viral post to be fake. The viral video of Yeti Narasimhanand Saraswati is old. He has not been arrested by the UP Police.