Fact Check: Photo of Rahul Gandhi Viral As That of Quattrocchi, viral post is fake 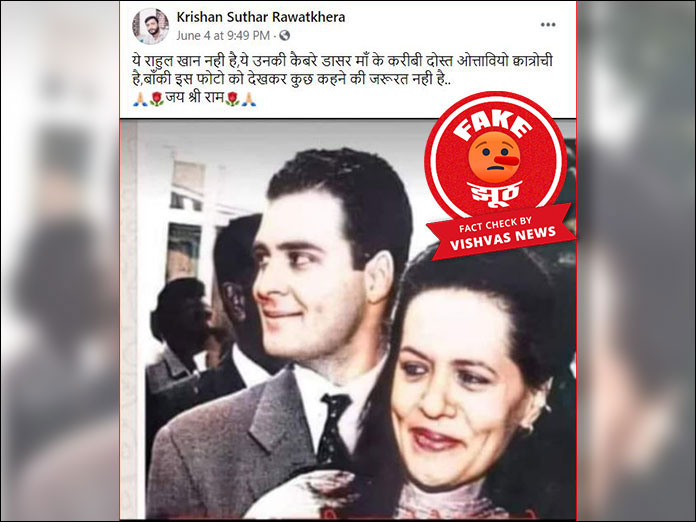 Vishvas News (New Delhi): An old picture of Congress President Sonia Gandhi with her son Rahul Gandhi is going viral on social media. As per the claim, the person standing behind Sonia Gandhi is Italian businessman Ottavio Quattrocchi. Vishvas News investigated and found the viral post to be fake. In fact, it is Rahul Gandhi standing with Sonia Gandhi. This picture is from a 1996 event.

Facebook user Krishna Suthar Rawatkhera posted a picture of Sonia Gandhi and Rahul Gandhi on June 4, claiming: ‘It’s not Rahul Khan, it’s Ottavio Quattrocchi, a close friend of his cabaret dancer mother, no need to say anything else on this…’

Vishvas News first searched the viral image by uploading it on Google reverse image tool. We found this picture on yahoo. This picture was present in a photo album made on Rahul Gandhi’s birthday. You can view it here.

During our investigation, we also found this picture on the website of Indian Express. From the caption of this photo, we came to know that the then Congress President had arrived with her son Rahul Gandhi at a function of the Special Protection Group. This photo is from 8th April 1996. It was taken by a PTI photographer. View the original picture here.

In the next phase of investigation, Vishvas News contacted Congress spokesperson Akhilesh Pratap Singh. He said that such lousy acts can only be done by the troll army. Rahul Gandhi can be clearly seen in the picture. But some people are so afraid of the Gandhi family that they keep trying to defame them day and night.

We scanned the profile of the user Krishna Suthar Rawatkhera who shared the viral photo. We found that the user has more than 10 thousand followers on Facebook.

Conclusion: Vishvas News investigated and found the viral post to be fake. In fact, it is Rahul Gandhi standing with Sonia Gandhi. This picture is from a 1996 event.