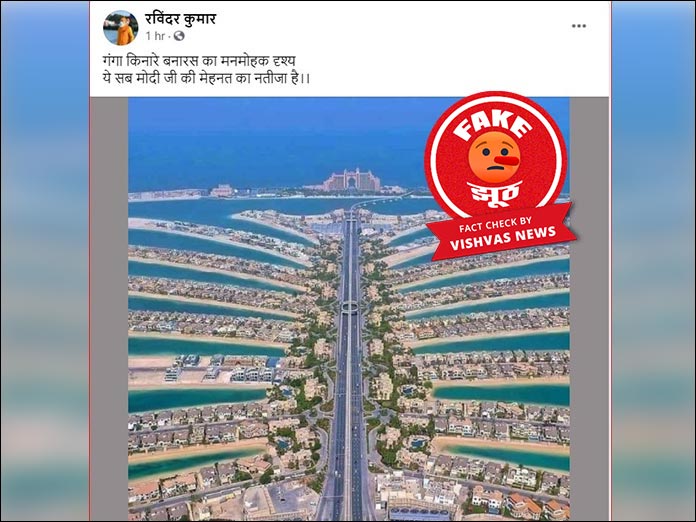 New Delhi (Vishvas News): A picture is going viral on social media with a claim that it is from Varanasi in Uttar Pradesh. In the photo, swanky roads and skyscrapers can be seen surrounded by blue waters.

Vishvas News investigated and found that the picture going viral is that of Palm Jumeirah of Dubai and not from Varanasi.

The Facebook page named ‘Shivraj Singh Chauhan BJP’ posted a picture on December 24, claiming: “The breathtaking view of Benaras on the banks of the Ganges is all a result of Modi’s hard work.”

Vishvas News searched the images on Google using the Google Reverse Image Search tool. We found that the picture has no connection with Banaras. The picture is of Palm Jumeirah in Dubai.

The view of Palm Jumeirah can be seen in the video below:

Vishvas News contacted Shashwat Mishra, senior correspondent in Dainik Jagran in Varanasi who confirmed that the post is fake.

We scanned the page that made the fake post and found that the page is followed by more than 53 thousand people. It was created on 2 March 2016.

Conclusion: Vishvas News investigated and found that the picture going viral is that of Palm Jumeirah of Dubai and not from Varanasi.