The viral pictures of the metro line collapse with a claim that the incident happened near Phoenix Mall in Lower Parel, Mumbai is misleading. The images are of an under-construction flyover collapse in Gurgaon. 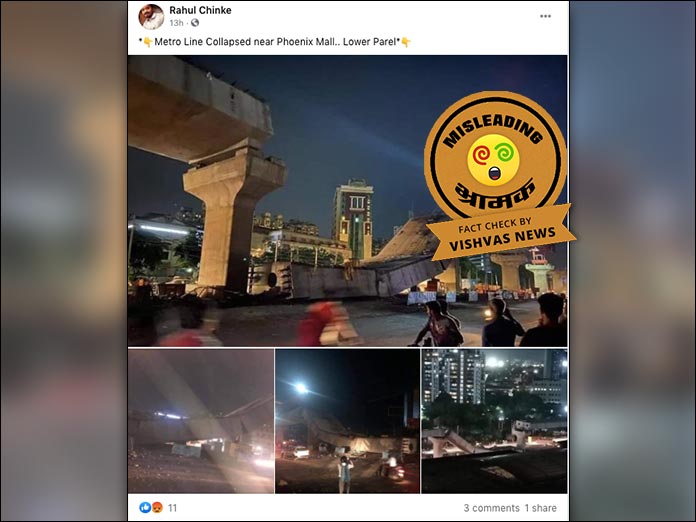 New Delhi, Vishvas News. Several pictures of a collapsed bridge are shared on social media with a claim as Metro line collapse near Phoenix Mall, Lower Parel in Mumbai. We found the post first on twitter and then on Facebook. Vishvas news investigation revealed the claim to be misleading, as the under-construction flyover collapse has happened in Sohna Road at Gurgaon, Harayana.

When we searched on the Internet using keywords like bridge collapse, we found several news reports about the incident that happened in Gurgaon. We did not find any news articles relating the incident to Lower Parel in Mumbai.

According to an article in the NDTV website, “A portion of a 6-km-long flyover on which construction work is still going on collapsed in Gurgaon on Saturday night.”

The broken span is part of the 6km elevated road being built along Sohna Road as part of the Gurugram-Sohna-Alwar highway project, originating from Rajiv Chowk, read a report in the Times of India website.

When we searched for the images using Google reverse image search tool, we found a twitter user named ‘Professor’ @ imanzim has shared the images captioned, “Under construction flyover near Subhash Chowk, Gurugram falls. No casualties reported so far. Hope everyone is fine there.”

Vishvas News contacted ACP (Sadar) Aman Yadav, who clarified to us that the incident happened in Gurgaon on August 22, Saturday.

“The incident happened in Sohna Road, Gurgaon on Saturday. There are no fatalities,” said Yadav.

Conclusion: The viral pictures of the metro line collapse with a claim that the incident happened near Phoenix Mall in Lower Parel, Mumbai is misleading. The images are of an under-construction flyover collapse in Gurgaon.