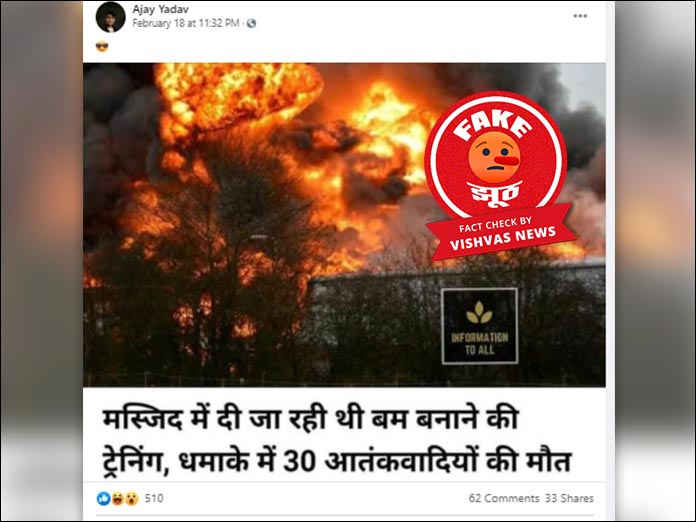 New Delhi (Vishvas News): A picture is going viral on social media in which fire can be seen in a building. It is being claimed that it is a picture of fire in a mosque.

Vishvas News investigation found the claim to be false. This photo is not of a fire in a mosque but of a fire in a chemical factory in an industrial estate in Stafford on March 2, 2016.

A post is shared on Facebook by a user named Ajay Yadav on a page named ‘Modi Hai To Mumkin Hai’. It was written with this picture “Bomb making training was being given in the mosque, 30 terrorist killed in the blast”.

Using the Google reverse image search tool, we found this picture on gettyimages.in and eyeem.com. The photographer who took this picture at both places is Richard Spieler.

After searching on Google using appropriate keywords, we found this picture uploaded on Richard Spieler’s Facebook account on March 2, 2016. This photo was claimed to be of a fire in Stafford.

We using the time filter of Google search and found a news report on theguardian.com. According to the news report, the incident took place when a chemical factory in Stafford caught fire.

We contacted Richard Spieler via Facebook Messenger to further investigate. He said, “This picture is old. It is of a fire in a chemical factory. “

We also searched the viral claim on the internet but didn’t find any news report.

Vishvas News scanned the profile of the page that shared the viral claim, Modi Hai Toh Possible. We found that the page has 312.2K followers.

Conclusion: Vishvas News investigation found the claim to be false. This photo is not of a fire in a mosque fire but of a fire in a chemical factory in an industrial estate in Stafford on March 2, 2016.