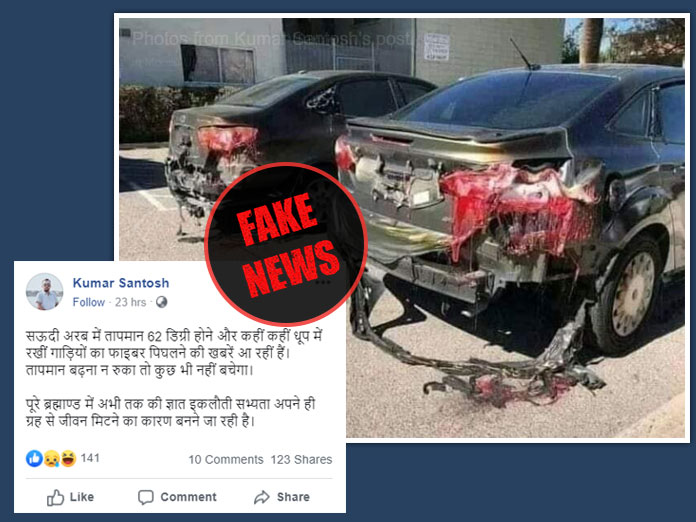 A post is getting viral on social media in which two damaged vehicles can be seen. The caption with the photos states that extreme heat caused melting of cars in Saudi Arabia. Vishvas News team investigated and found that the cars were damaged not due to an extreme temperature but because of a fire at a construction site close to where the vehicles were parked. The incident happened in Arizona and not in Saudi Arabia.

In the viral picture, two damaged cars can be seen. The description in the viral post reads: The cars melted in Saudi Arabia due to the high temperature of 62 degree Celsius.

We started our investigation by breaking down the elements of the viral claim.

Claim 1: The temperature at Saudi Arabia had gone to 62 degree Celsius

In order to verify the first claim, we performed Google search using appropriate keywords and found a story published by Gulf News on June 12, 2019. As per the story, Kuwait and Saudi Arabia recorded the highest temperature on earth last week.

Kuwait and Saudi Arabia are two different countries. We contacted the weather department of Kuwait and their PRO said that the temperature of 63 degree Celsius was recorded on June 8, 2019, and there was one casualty reported but the photo of the damaged cars shown in the viral post is not from Kuwait.

As per the second claim, two cars were melted due to the high temperature in Saudi Arabia.

We investigated by performed Google reverse image search of the viral photo. We found that the image of damaged cars as claimed from Saudi Arabia is actually from Arizona, United States. We also found a story on tiboaz.biz which stated that the images are from the aftermath of the mark at Tucson Student Housing Development’s fire.

The fire was so intense that the cars that were parked at a distance were also melted.

In our investigation, we found that images of the “melted” cars shown in the viral post are not from Saudi Arabia, but Arizona. The cars melted due to extreme heat from a nearby construction fire, the heat from the sun did not melt the cars.