Prime Minister Narendra Modi did not shave his head after the demise of his mother Heeraben recently. The viral image of the PM is edited. 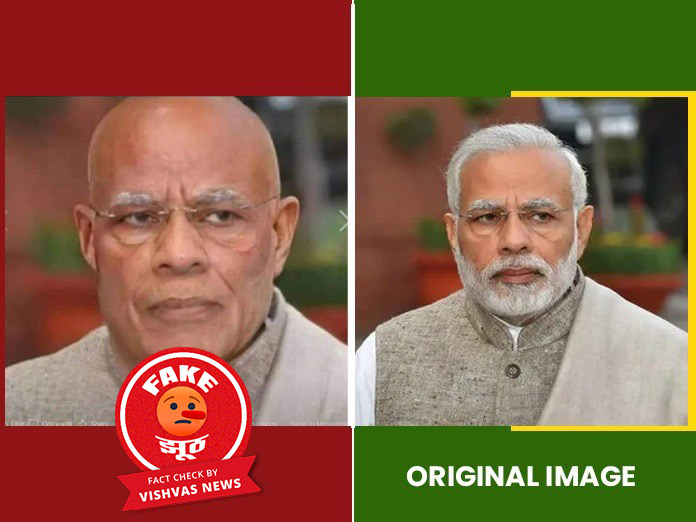 New Delhi (Vishvas News): Vishvas News came across a picture of Prime Minister Narendra Modi, in which he appeared to had shaved his head and beard. It was claimed in the post that according to the Hindu rituals, Modi had shorn his head because his mother Heeraben died on December 30. Vishvas News in its investigation found that the viral post is fake.

Translation: After the demise of Narendra Modi’s mother Heeraben, Prime Minister Narendra Modi shaved his head according to Hindu rituals.

Vishvas News started its investigation by searching for news reports about Prime Minister Narendra Modi and the demise of his mother.

We found a few reports about the demise of his mother. But, we didn’t find anywhere that PM Modi has shaved his head.

After the demise of his mother, the prime minister inaugurated the railway projects in West Bengal virtually. The news reports had the picture of the same and it did not show him with his head shaved.

He also virtually chaired National Ganga Council meeting in Kolkata. There too we did not notice his look as given in the viral picture.

We also checked the Twitter profile of PM Narendra Modi and found that in the latest pictures too, he had not shaved his head.

We did a Yandex search on the viral photo and found the original image of PM Narendra Modi.

Check the comparison between the two pictures below.

In the next step of investigation we contacted Dr Bizay Sonkar Shastri, BJP national spokesperson. He told us that the viral claim is fake and that it is being done to malign the image of PM Narendra Modi. “If he had really shaved his head, you would have seen it in the pictures being shared over the official handles and his public appearances,” Dr Shastri said.

In the last step of investigation Vishvas News did a social background check of the user who shared the viral post. Facebook user, प्रवीण राठौड़ ठि.हरनावा पट्टी is followed by 7K people.

Conclusion: Prime Minister Narendra Modi did not shave his head after the demise of his mother Heeraben recently. The viral image of the PM is edited.