The viral video, talking about digital wallet fraud and measures in the name of RBI Governor Shaktikanta Das, is fake and digitally altered. The Governor’s video was combined with another YouTube video with the wrong claim. 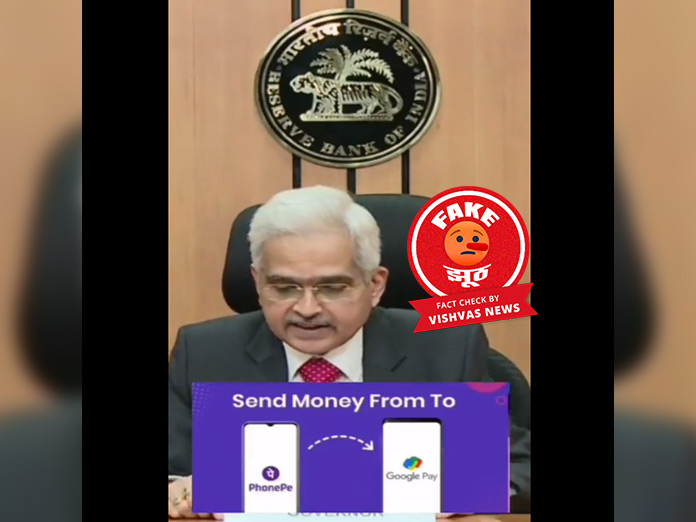 New Delhi (Vishvas News): A video of Shaktikanta Das, Governor, the Reserve Bank of India (RBI) is going viral on social media. He can be seen and heard talking about the measures to prevent digital wallet fraud.

Vishvas News received many queries about the video on its WhatsApp chatbot number +91 9599299372. After investigation, we found the viral video to be fake. The voice heard in the video is not that of RBI Governor Shaktikanta Das, but it has been digitally altered.

Twitter user BlacknWhite shared the viral video of RBI Governor Shaktikanta Das appealing to the masses about digital wallet fraud. The archive link of the post can be found here.

In the viral video, one can see the RBI logo behind the Governor while he addresses the media. On scanning RBI’s YouTube channel, we found a video of the Governor in a similar outfit from a year ago.

The similarity between the screenshots of both the videos can be seen in the collage below.

This video of Shaktikanta Das’s speech was uploaded on 5 May 2021 after he made significant announcements regarding the economy in the context of the Covid-19 transition.

The complete statement of his address is also available on the RBI’s website, in which the RBI Governor while reviewing the then economic situation, announced additional relief measures.

During his 30-minute address, he never talked about wallet payments or related threats. The Twitter handle of RBI, while retweeting a tweet by PIB, has called the viral video fake.

The tweet clearly states that the voice heard in the video is not that of the RBI governor. It took us a social media search to trace the source of the sound heard along with the video.

Digital wallets and helpline numbers are shown in the viral video, so we searched them using keywords. In the search results, we found a video uploaded on the ‘Reel Shorts’ YouTube channel on 13th August 2022, which talks about measures that must be undertaken to block the digital wallet in case of mobile theft. Visuals and audio of the same have been used in the viral video.

The video explaining the measures to block the digital wallet in the name of the RBI governor is edited and fake. We contacted an RBI spokesperson regarding the viral video. He said, “The viral video is fake, similar information has been given from RBI’s Twitter handle.”

Conclusion: The viral video, talking about digital wallet fraud and measures in the name of RBI Governor Shaktikanta Das, is fake and digitally altered. The Governor’s video was combined with another YouTube video with the wrong claim.