The viral post is fake. RBI has not yet decided to stop the circulation of old currency notes of denomination Rs 5, Rs 10 and Rs 100. 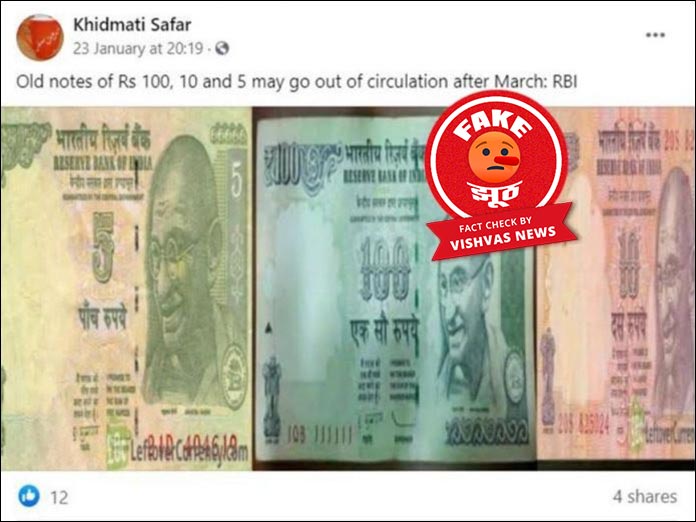 Vishvas News investigation revealed the claim is fake. RBI has not yet made any such decision.

Facebook user Khidmati Safar shared a post in with pictures of an old 5 rupees 100 rupees and 10 rupees currency notes claiming RBI has decided to withdraw them from March. The archived version of the viral post can be seen here .

Vishvas News searched on the Internet and found  media reports  quoting B Mahemesh, Assistant General Manager of RBI stating at the District Level Consortium Management Committee meeting in Mangalore about RBI’s plan to stop circulation of old 100 rupee notes from March-April.  We could identify that it social media posts are viral since then.

RBI had issued new currency notes of denomination 100 in purple color in 2018, clarifying the old 100 rupee notes present in the market will also remain legal. The RBI notification can be seen here .
Vishvas News contacted PA of Yogesh Dayal, Chief General Manager of RBI’s Department of Communication for verification. “The viral post is fake. At present, the RBI has not given any such instructions,” he said. He added that RBI has also recently clarified this in a tweet.

Social scanning of the user who shared this viral post revealed that his profile has 46,815 followers on Facebook.

Conclusion: The viral post is fake. RBI has not yet decided to stop the circulation of old currency notes of denomination Rs 5, Rs 10 and Rs 100.