In the investigation of Vishvas News, viral post attributed to Sanjay Raut and Loksatta stating that Shiv Sena would contest elections on the NCP’s party symbol turned out to be fake. Viral post is edited. 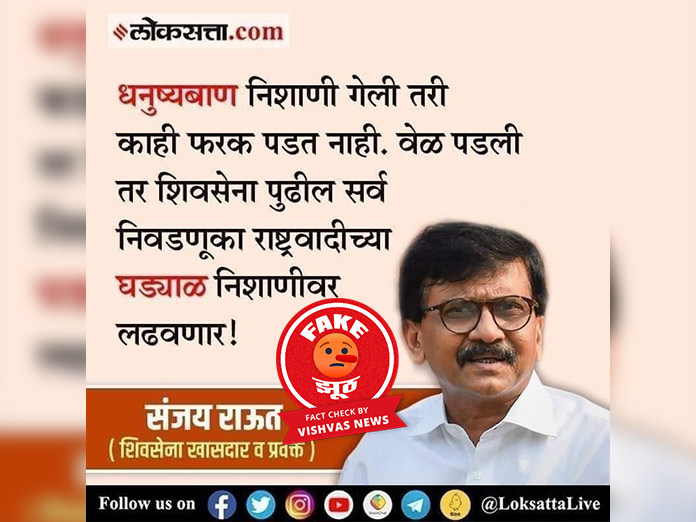 Vishvas News (New Delhi): Amidst the Maharashtra political chaos and the decision about the much debated Shiv Sena political symbol still pending, a post attributed to Shiv Sena MP and spokesperson, Sanjay Raut is being widely shared on Facebook. The post claims that Sanjay Raut gave a statement saying Shiv Sena is ready to contest elections on NCP symbol if it loses the bow and arrow symbol of the party. The post also attributed to leading Marathi daily, Loksatta.
Vishvas News in its investigation found that Sanjay Raut did not give such statement and Loksatta didn’t carry it.

in its investigation found that Sanjay Raut did not give such statement and Loksatta didn’t carry it.

Translation: They will not remain silent until the shop is closed.
The remaining Shiv Sainiks start preparing for the election, Sir has chosen an option

Translation: It doesn’t matter if Shiv Sena loses the election symbol of bow and arrow, Shiv Sena will fight all its elections on the NCP’s party symbol.

Vishvas News started the investigation in the case with a keyword search.

Nowhere in the news was it mentioned that Raut spoke about fighting on NCP symbol.

We could not find any report on similar lines of viral post.

We found one post with the same picture of Sanjay Raut. However, the content in the post was different than that of the viral post. It was hence clear that Sanjay Raut did not give this viral statement regarding the party symbol.

In the next step of investigation we contacted ANI correspondent Saurabh Joshi who has been covering the current Maharashtra politics since the beginning. He informed that Raut did not give the viral statement.

We also connected with digital head at Loksatta.com, Yogesh Mehandale. Who too confirmed that the viral post is edited and that Loksatta did not post the viral image with Sanjay Raut.

In the next step of investigation Vishvas News contacted Shiv Sena MP and spokesperson Priyanka Chaturvedi. She too said that the content of the viral post is fake. Sanjay Raut did not give viral statement.

In the last step we did a social background check of the user who shared the viral post. Sushant Yerondkar belongs to a particular ideology.

Conclusion: In the investigation of Vishvas News, viral post attributed to Sanjay Raut and Loksatta stating that Shiv Sena would contest elections on the NCP’s party symbol turned out to be fake. Viral post is edited.