Fact Check: Sumitra Mahajan has not been declared Governor of Maharashtra yet, viral claim is fake 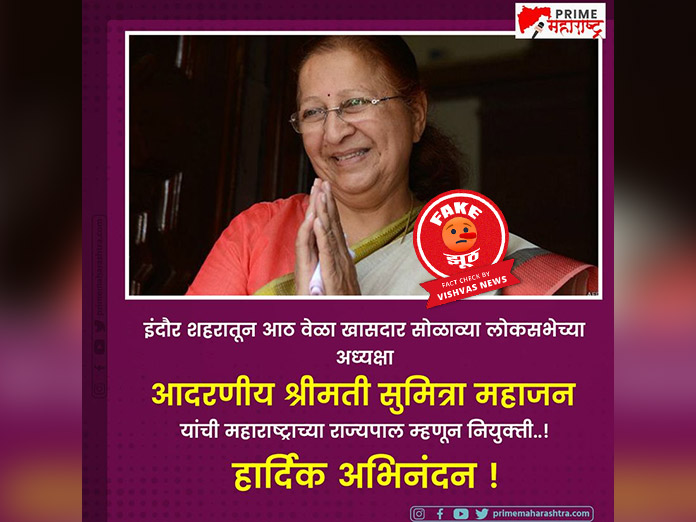 New Delhi (Vishvas News): Vishvas News came across a viral post that stated that noted politician and ex-Lok Sabha speaker Sumitra Mahajan is the new governor of Maharashtra. However, in the investigation done by Vishvas News, we found the viral claim to be false.

Claim:
Facebook user Prime Maharashtra shared a graphic that claimed in Marathi that Sumitra Mahajan is now the new Maharashtra governor. She has been an MP from Indore eight times.

Vishvas News started the investigation with simple Google Keyword search. We checked online for news articles confirming if Sumitra Mahajan has been declared the new governor of Maharashtra.

This clearly suggested that Sumitra Mahajan has not been declared governor, yet.

We also found an article in the same regards on Dainik Bhaskar.

In the next step of investigation, we contacted ANI journalist Saurabh Joshi, who covers politics. He informed that Sumitra Mahajan has not been declared the governor of Maharashtra. Viral claim is false.

In the last step of investigation we did a social background check of the user who shared the post. The page Prime Maharashtra is liked by over 11 lac users and operates from Pimpri in Maharashtra.