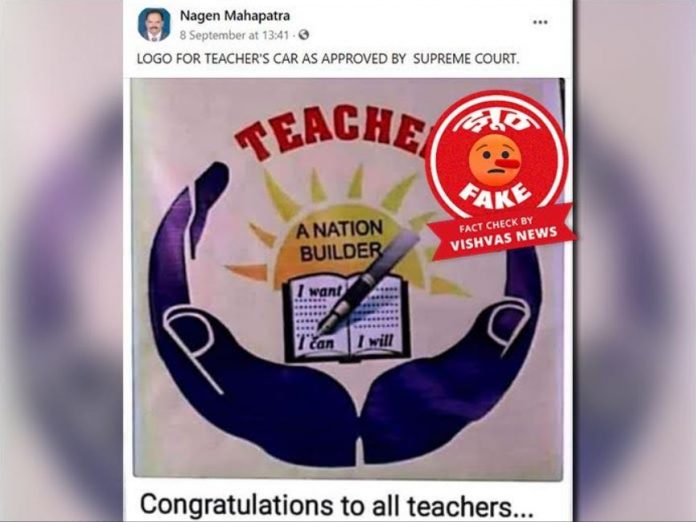 New Delhi (Vishvas Team). A viral post on social media shared with an image of a logo claims that the Supreme Court has given nod to teachers for using the logo sticker on their private vehicle (car). Vishvas News investigation revealed the claim is fake. The Supreme Court has not approved any such logos for teachers as in the claim.

Facebook user Nagen Mahapatra shared a picture of a logo captioned, “Logo for teacher’s car as approved by Supreme Court.” The archived version of the post can be seen here .

As the claim stated it as approval from the Supreme Court, we searched on its offical website. We did not find any order as stated in the viral post.

We searched for this logo using Google reverse search image tool. We found it on the profile picture of Facebook page Teacher Logo. On this page we found many users posting pictures of this logo stickers on their cars.  We also found group photos where people are holding this logo in their hands. We searched on Internet using keywords and found some people presenting this logo on the website of Commerce Talent Search Examination Foundation. On careful observation, we found the name of the logo creator Rajesh Khanna written in Punjabi language. We could identify that this logo was designed by Khanna, the Principal of Government Senior Secondary School in Kasabad, Ludhiana, Punjab.

Vishvas News contacted Khanna to verify the claim. Khanna clarified to us that serving in the profession for many years, he created the logo to dedicate to teachers. He also told us that he wanted teachers to be recognized just like doctors, lawyers and chartered accountants have their own logo.

“The viral claim is fake. Supreme Court has not given any recognition to this logo,” said Khanna.

Facebook user Nagen Mahapatra is one among the several users who shared the viral post. Social scanning of his profile revealed that he is from Bhubaneswar, Odisha.

Conclusion: The viral claim is fake. The Supreme Court has not approved any such logos for teachers.