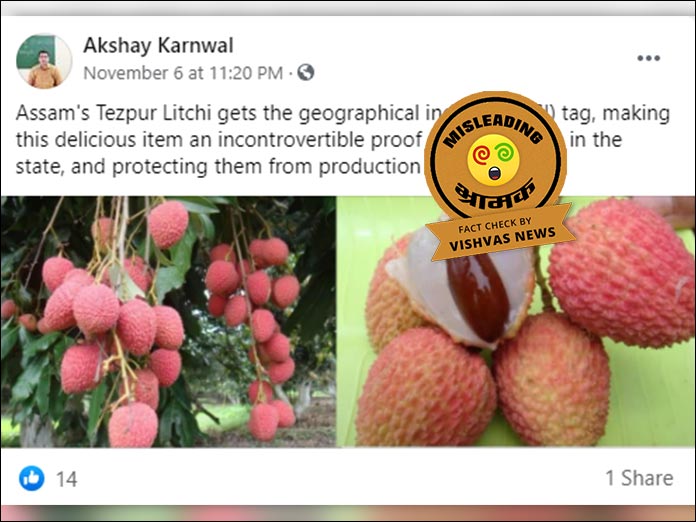 New Delhi (Vishvas News): A post circulating online claims that Tezpur Litchi gets a Geographical Indication (GI) tag recently. When Vishvas News investigated the post we found it to be misleading. Tezpur Litchi did get the GI tag, but not recently. It happened in 2015.

The post shared on Facebook by a user named Akshay Karnwal reads: “Assam’s Tezpur Litchi gets the geographical indication (GI) tag, making this delicious item an incontrovertible proof of their origins in the state, and protecting them from production elsewhere.”

We performed a Google search using the keywords “Tezpur Litchi GI Tag”. We found a tweet from the official Twitter account of the Agricultural and Processed Food Products Export Development Authority (APEDA).

As per the tweet shared on November 6, 4:13 pm : “#Tezpur #Litchi of #Assam have got the geographical indication (GI) tags, making this item an incontrovertible proof of their origins in the state, and protecting them from production elsewhere.”

In the tweet, there was no mention of a specific date or time
of the Tezpur Litchi’s GI tag.

What is a GI tag?

A geographical indication (GI) is a sign used on products that have a specific geographical origin and possess qualities or a reputation that are due to that origin. In order to function as a GI, a sign must identify a product as originating in a given place.

On the website of Intellectual Properties India under Geographical Indications Registry, we found that Tezpur Litchis were filed in 2013 and got certified in 2015.

We also found a PDF document on the official website of the Office of the Controller of Patents, Designs and Trademarks, Ministry of Commerce and Industry, Government of India. The PDF has Tezpur Litchi listed in the period April 2014-March 2015.

Also, in an email conversation, Dr. Ajit Baishya, Director of Post Graduate Studies, Assam Agricultural University stated that it is a moment of pride that Tezpur Litchis got a GI tag. This tag was given in 2015, not recently.

The post is shared on Facebook by a user named Akshay Karnwal. When Vishvas News scanned the profile of the user, we found that the user has 1666 followers till this fact check was published.

Conclusion: Tezpur Litchis got GI tag in 2015, not recently. The viral post is misleading.