Fact Check: The Art of Living’s Mongolia event is being falsely reported as Japan’s 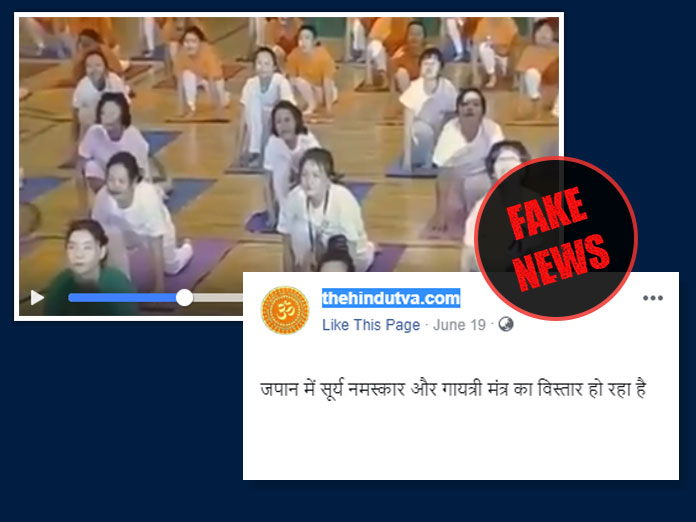 Vishvas News|New Delhi|A video going viral on social media shows a gathering of some people performing Yoga. The people are clad in the three colours of Indian National flag. The three-minute video was shared with the caption “Surya Namaskar and Gayatri Mantra have spread to Japan and are being practised there.”  In our probe,  we found that contrary to the claim, the video is not from Japan but actually from Mongolia.

The viral video shows a gathering of people performing Yoga clad in Saffron, White and Green(the three colours of the Indian National flag). The description reads: “जपान में सूर्य नमस्कार और गायत्री मंत्र का विस्तार हो रहा है”, which translates to: Surya Namaskar and Gayatri Mantra have spread to Japan and are being practised there. The video was uploaded by the Facebook page thehindutva.com and has been viewed over 144,646 times till this story was published.

In order to investigate this post, we fetched key frames of this video using the InVid tool and performed Google reverse image search. In our investigation, we found that the original video was uploaded by Prime Minister Narendra Modi’s verified YouTube channel on May 17, 2015 with the description: ” The Prime Minister, Shri Narendra Modi at the Community Reception and Yoga Event, organised by ‘Art of Living’, in Ulaanbaatar, Mongolia on May 17, 2015.”

For more clarification, we talked with Art of Living’s spokesperson Laxmi Murli, who confirmed that “this video is from a meditation event organized by the Art of Living in Mongolia, not Japan.”

Conclusion: In our investigation, we found that this video is not of Japan but Mongolia. On May 17, 2015, the video of community reception and yoga program organized by the Art of Living in Ulaanbaatar, Mongolia is being spread as Japan’s.