Fact Check: The news of death of Haryanvi dancer Sapna Choudhary is fake

The news of the death of an artist named Sapna in a road accident in Sirsa a few weeks ago is going viral with the wrong claim linking it with Sapna Choudhary. 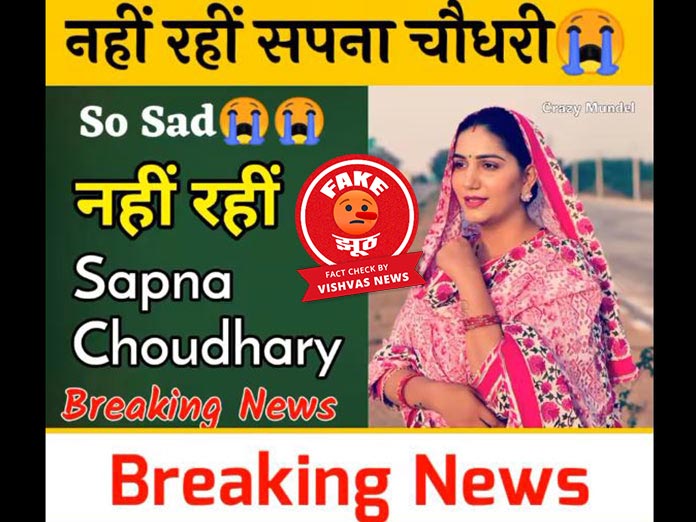 New Delhi (Vishvas News): The fake post regarding the death of Haryanvi artist and dancer Sapna Chaudhary is going viral on social media. It is being claimed that Sapna Chaudhary died in a road accident.

This claim turned out to be false in the investigation of Vishvas News. Sapna Choudhary has not died in any accident. She is completely doing fine. The news of the death of an artist named Sapna in a road accident in Sirsa a few weeks ago is going viral with the wrong claim linking it with Sapna Choudhary.

Sapna Chaudhary is a famous artist and the news of the death of such an artist in an accident would have made headlines, but we could not find any such news in the google search.

The claim in the viral post quoted a video of India News. The video mentions the death of artist Sapna in a road accident in Sirsa. During our search, we found a video bulletin uploaded on the official YouTube channel of ‘India News Haryana’ on August 30, 2021, which is similar to the video going viral. According to the information given with the bulletin, ‘Music artist Sapna was killed in a road accident in Sirsa and five other artists were also injured in this accident.’

The bulletin does not mention Sapna Choudhary, but the death of another artist, Sapna. In a news search, we found a report published on Amar Ujala’s website on August 30, 2021 describing the incident.

According to the report, ‘The members of the dance group were returning to Sirsa after celebrating someone’s birthday in Fatehabad. They met with an accident when a cow came in front of their car. One of the girls of the team was killed in the accident, while the other four were seriously injured. Due to the high speed of the car, the car overturned and reached the fields on the other side of the road. 30-year-old Sapna died in the accident. The matter was reported to the local police station. After recording the statements of the relatives of the deceased, the police handed over the dead body to the relatives after conducting postmortem. The incident happened around 12 pm on Sunday night.

We scanned the profile of the user who shared the viral post. The user is based out of Delhi and has 300 followers.

Conclusion: The news of the death of an artist named Sapna in a road accident in Sirsa a few weeks ago is going viral with the wrong claim linking it with Sapna Choudhary.