Fact Check: The Singer In This Video Is Ananya Sabnis, Not Kishore Kumar’s Granddaughter Muktika Ganguly 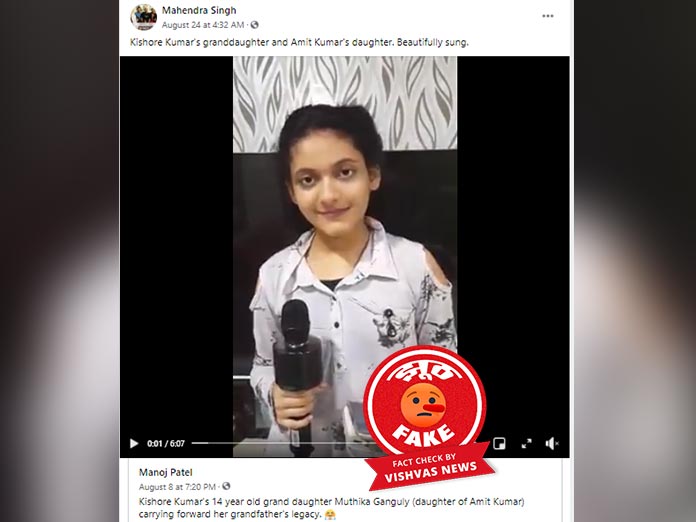 A viral video on social media platforms features a woman singing the Hindi song “Deewana Hua Badal”. It is shared with a claim that the singer is the granddaughter of veteran singer Kishore Kumar. Vishvas News investigation revealed the claim to be fake.  The singer in the viral video is Ananya Sabnis and not Kishore Kumar’s granddaughter Muktika Ganguly.

To investigate the viral video, we put this video on the INVID tool and extract its keyframes. We searched the keyframes on Google using reverse image search tool. We found the video uploaded on a Facebook profile in July captioned, “Song 6-Deewana hua badal: A duet of Rafisaab and Asha ji by Ananya Sabnis.” According to the post, the singer seen in the video is Ananya Sabnis.

We contacted Manisha Sabnis who uploaded this video. He said “My daughter Ananya is the girl who sings in the video. She is not related to singer Kishore Kumar.”

We searched the Internet with the keyword “Singer Ananya Sabnis”. We found lots of exclusive videos clarifying to that the singer seen in the viral video is Ananya Sabnis.

In the viral video, the singer was claimed to be Muktika Ganguly. We found that Muthika Ganguly is Kishore Kumar’s granddaughter and also a singer. We could clearly spot difference in physical features of Sabnis and Ganguly. Ganguly started her music career in 2015 with her father Amit Kumar. Amit launched his debut album ‘Baba Mera’ in 2015.  The video of this album can be seen below.

Facebook user Mahendra Singh is one among the several users who shared the video with false claims. Social scanning of his profile revealed that he lives in New Zealand and has 180 friends on Facebook.

Conclusion: The viral claim is fake. The singer in the viral video is Ananya Sabnis and not Kishore Kumar’s granddaughter Muktika Ganguly.