Fact Check: The video of the girl being pulled out of the open drain is not from UP or Rajasthan, it is from Delhi

This video of a girl being pulled out of an open drain is from Begumpur, Delhi. It has nothing to do with Bhilwara in Rajasthan and Prayagraj in Uttar Pradesh. 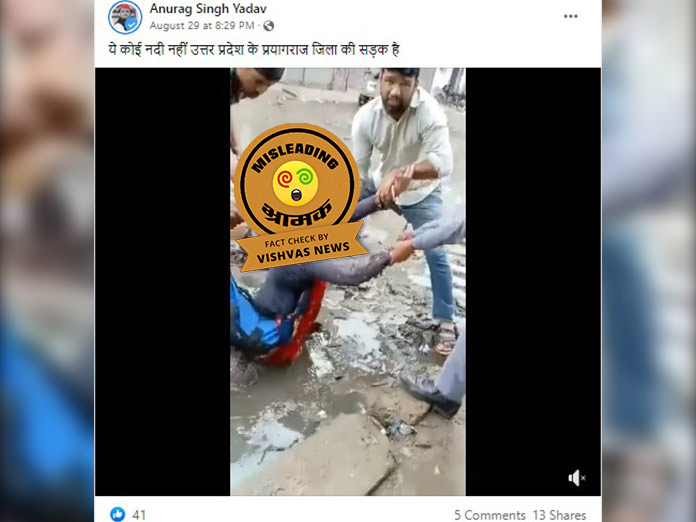 New Delhi (Vishvas News). A 30-second video is going viral on social media where a few people can be seen trying to pull out a girl from an open drain on a flooded road. Social media users are claiming that this incident happened in Prayagraj in Uttar Pradesh. Some social media users are also spreading it in the name of Bhilwara in Rajasthan.

Vishvas News in its investigation found that the viral video is from Delhi. It has nothing to do with Rajasthan or Uttar Pradesh.

Sharing the video, Facebook user ‘Anurag Singh Yadav’ wrote, “This is not a river, it is a road in Prayagraj district of Uttar Pradesh.”

Twitter user Prakash Raj (Parody) (archive link) has also posted the video and said that it is from Prayagraj in Uttar Pradesh.

We took the help of InVid tool to investigate the viral claim. On searching the keyframes on Google reverse image, we found a tweet from a Twitter account named Sumit Agarwal. Posting this on 27 August 2022, the user wrote that it is from Begumpur in Delhi.

The Information and Public Relations Department of Rajasthan also tweeted on 26 August calling this video not from Rajasthan but from Delhi.

We called Hira’s Multi Specialty Hospital to confirm this. From there, Dr. Kapoor said, ‘The viral video is from Begumpur Barwala Road Delhi itself. This incident happened four-five days back.”

We scanned the profile of Facebook user ‘Anurag Singh Yadav’, who made the video viral with a misleading claim. According to the profile, he lives in Lucknow.

Conclusion: This video of a girl being pulled out of an open drain is from Begumpur, Delhi. It has nothing to do with Bhilwara in Rajasthan and Prayagraj in Uttar Pradesh.