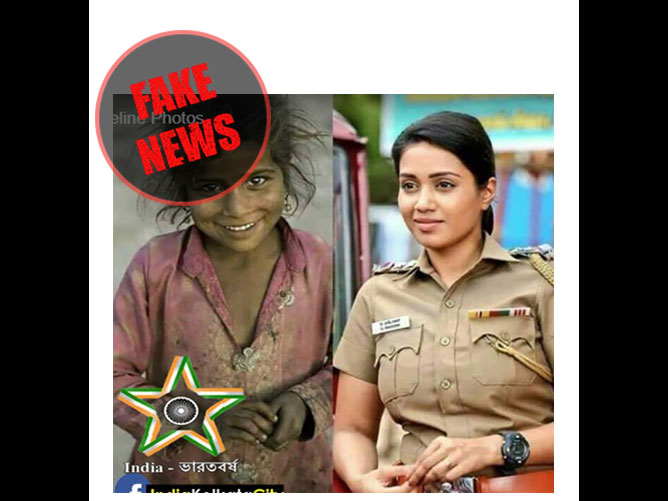 New Delhi (Team Vishvas).  A photo collage is going viral on Facebook that shows a poor child on the left and a lady police officer on the right. This picture is accompanied with text in Bengali, which loosely translates to ‘orphan girl Nivtha Pathur Raj is now a police officer in Tamil Nadu’ in English. Actually this post is fake. The woman shown as a police officer is actually a Tamil actress and the girl on the left is a Pakistani child.

In order to investigate this photo, we first got this Bengali text translated to English by our Bengali Translator. The English translation of this text is “Strength and honesty can lead you to success. An orphan Nevatha Pethuraj is a police officer in Tamil Nadu today. We salute her.”

We searched the photo of alleged lady police officer on Google reverse image and found that she is actually a Tamil actress Niveda Pythuraj. The picture being used is from Nivedita’s film Thimiru Pudichavan.

On performing a reverse image search on the picture of the child in the photo, we reached some Pakistani NGOs’ sites where this photo was used and according to the description, this girl is Hira and she lives in Peshawar.

We also found this photo on the website of a UAE based photographer Sohail Karmani who said he clicked this photo in Pakistan’s Sahiwal.

This photo was shared on Facebook by a page called Kolkata / Calcutta (City of Joy). The page has a followership of 772,716 people. We analyzed the content of this page and found out that most of the content posted on this page is misleading. In the review section of this page too many people have lodged a complaint regarding the contents of this page.

Conclusion: In our investigation we found that the post going viral is wrong. There is no similarity in the pictures used in this post and the written description. Photographs of a Tamil actress and a Pakistani girl have been used in a fraudulent way in this photo.