Fact Check: These miscreants were caught in Gujarat, not Uttar Pradesh

Vishvas News in its investigation found that the claim made with the collage is false. This incident is not from Uttar Pradesh but from Gujarat. 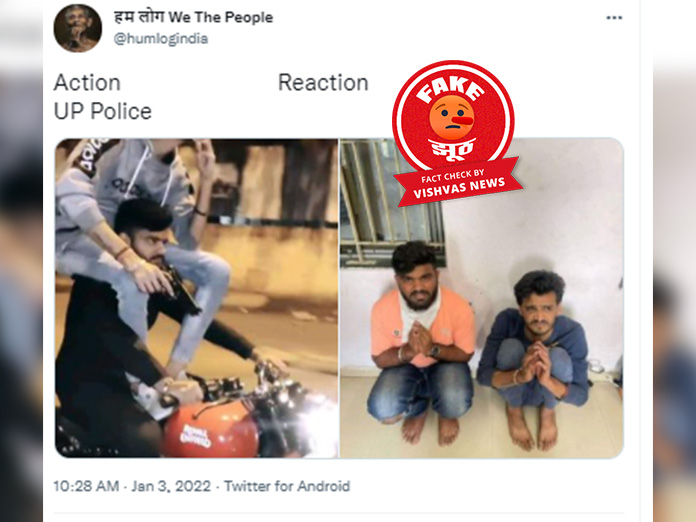 New Delhi (Vishvas News) – A post is going viral on social media, in which two images have been used. In the first image, two boys can be seen doing stunts. And in the other image, these same two boys can be seen sitting on the ground with folded hands. It is being claimed with the post that two boys who were doing stunts on the road have been caught by the UP Police. Vishvas News in its investigation found that the claim being made with the post is false. This incident is not from Uttar Pradesh but from Gujarat.

To begin our investigation, we first searched these images on Google reverse image. We found a report on the website of Dainik Bhaskar where a collage of both of these images was used. The story was filed on January 3. According to the news, “Translated: Two youths living in Chhaprabhatha area of Surat city in Gujarat did stunts late night while smoking cigarettes and pistol in hand. They made a video of it and shared it on social media. On the basis of the viral video, Amroli Police started an investigation. A case has been registered and both the youths have been arrested. After this, both of them confessed their mistake and also apologized.”

We also found this collage in a news report on etvbharat.com. According to this news also the incident is from Surat.

Vishvas News contacted Shatrughan Sharma, senior correspondent of Dainik Jagran Gujarat regarding this matter. He also confirmed that the matter was from Surat itself. He said “on January 2, two youths, Nagajan Oddra and Bharat Praveen Gadvi, were arrested by the police for performing stunts on a bike during night curfew in Surat’s Amroli police station area and uploading a video of it on internet media. During interrogation, they confessed that on December 14, they made a video of this stunt and uploaded it on internet media on December 28. After being caught by the police, they were brought to the police station where they also apologized with folded hands and promised not to do such a thing again. The revolver was actually a lighter.“

We did the social scanning of ‘We The People’ the Twitter user that shared the fake post, we found that the handle is followed by 59.9K people.

Conclusion: Vishvas News in its investigation found that the claim made with the collage is false. This incident is not from Uttar Pradesh but from Gujarat.