Fact Check: This girl reunited with her family hours after being lost; old video viral with the false claim

This claim proved to be false in the investigation of Vishvas team. This video, which is going viral with the story of Mangalore beggars, is actually from Jaitpur Gurdwara in New Delhi. And the girl seen in the video reunited with her family on the same day when she was lost. 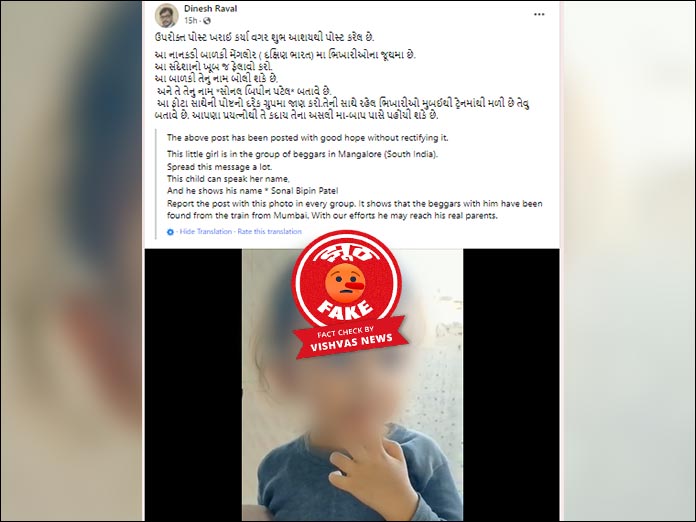 New Delhi (Vishvas News). A video is viral on social media where a man can be seen carrying a small child in his arms. The person making the video is appealing to the people that this girl has separated from loved ones, help her to reunite with her family. People are uploading the video on Facebook, and claiming that the girl was allegedly found with some beggars in Mangalore, Karnataka. Vishvas team found in its investigation that this claim is false. This video was actually shot in Jaitpur gurdwara in New Delhi early this year. And the girl seen in the video reunited with her family on the same day.

Facebook user Dinesh Rawal shared this video on Facebook and wrote “Translated: This little girl belongs to a group of beggars in Mangalore (South India). Spread the word. This girl can speak her name, and she calls her name as Sonal Bipin Patel. Share a post with this photo in each group. With our efforts, she can reach her real parents.”

To check the viral claim, we first watched this video carefully. The person recording the video, at one point said that this girl was found in Jaitpur. On internet searching, we came to know that Jaitpur is a locality in Delhi.

We uploaded the viral video to the InVID tool and extracted several grabs and then searched them on Google reverse image with the keywords “Jaitpur+Missing Girl”. We found this video in a Facebook post, in which it was said that the girl seen in the video was found in Jaitpur village gurdwara in Delhi. This video was uploaded on 1 January 2021. The text written along with the video read, “This girl is found in Jaitpur village Delhi, her family members can come and pick her up from the Gurudwara. Friends, share the video as much as possible.

After this, we called Jaitpur Gurdwara. We talked to Giani Puran Singh ji. He confirmed that this video is from Jaitpur Gurdwara only. When some people had brought this girl to the gurudwara. He told that the gurudwara’s sevaks had spread the video of the girl in the community and later the girl’s mother came and picked her.

We searched the internet with the help of keywords to see if any such news has come to the fore in Mangalore recently. We did not get any such news.

Finally, Vishvas News did a social scanning of the Facebook account of Dinesh Rawal. The user is a resident of Ahmedabad.

Conclusion: This claim proved to be false in the investigation of Vishvas team. This video, which is going viral with the story of Mangalore beggars, is actually from Jaitpur Gurdwara in New Delhi. And the girl seen in the video reunited with her family on the same day when she was lost.