Fact Check: This is not the footage of any real plane crash; the viral claim is fake

In the investigation of Vishvas News, the viral post in the name of a plane crash in Indonesia turned out to be fake. The viral video has been created with the help of a software. 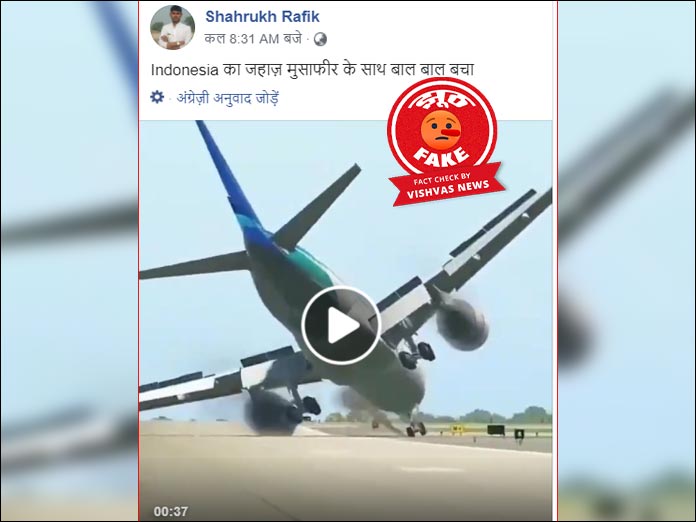 New Delhi (Vishvas News). A video of an airplane making a crash landing is going viral on social media. Garuda Indonesia is written on the plane. Users are making this video viral, claiming that this accident happened with a plane in Indonesia. Vishvas News investigated the viral post. Both the viral claim and the video turned out to be fake. Investigation revealed that the viral video was made with the help of software.

Facebook user Shahrukh Rafiq uploaded this video on his account claiming: ‘The plane of Indonesia passengers has a narrow escape.’

This video was uploaded on Jan 9.

Vishvas News first used online tools available on the Internet to find out the truth about the viral video. We extracted some screengrabs of this video by uploading the viral video to the InVID tool. On searching these keyframes on Google reverse image, we found a video uploaded on 2 May 2020. It also included footage from the viral video. The description read that this is only in the flight simulation. This situation is not real!

Which means the video is not original. This is just a flight simulation, that is, it has been made with the help of the computer.

Continuing the investigation, Vishvas News contacted cyber security expert Sunny Vaghela. We shared the viral video with him. He told us that the viral video is fake. There are many such software on the Internet, with the help of which such videos can be made.

We did the social scanning of Facebook user Shahrukh Rafiq and found that the user is a resident of Haryana. He has more than four thousand Facebook friends.

Conclusion: In the investigation of Vishvas News, the viral post in the name of a plane crash in Indonesia turned out to be fake. The viral video has been created with the help of a software.