Noo, this isn’t the image of Union minister Smriti Irani; viral post is fake. The image is edited. 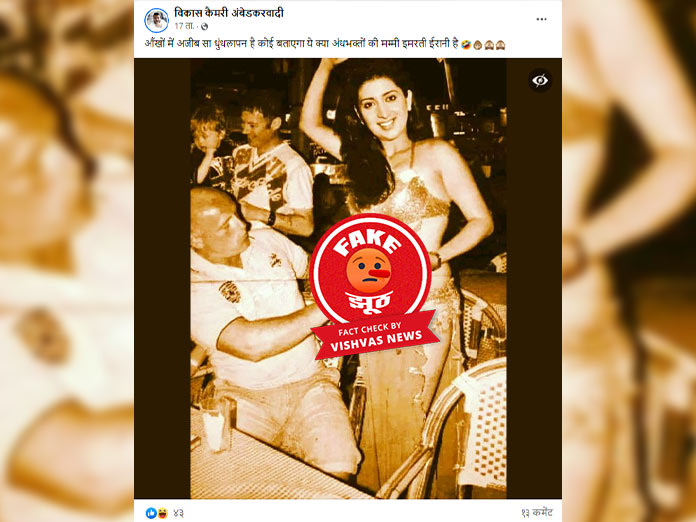 Vishvas News (New Delhi): Vishvas News came across an image of the Minister of Women and Child Development of India, Smriti Irani that is being widely circulated on social media. As per the claim, the black and white image shows dressed up young Smriti Irani in a belly dance costume and a man likely doing her touch-up. Vishvas News, in its investigation, found that the viral image is edited and is not an old image for Union Minister Smriti Irani.

Investigation:
We started our investigation with a simple Google Reverse Image search on the viral image.

When we closely looked at the photo, we also observed that there is a filter that was applied to the viral photo to make it look like an old photo.

We found the original image on the website of tripadvisor.com.

The similarity between the two images was clearly visible.

The caption in the picture said, ‘Photo: Belly Dancer on the Turkish BBQ night’

In the next step of investigation, Vishvas News contacted BJP spokesperson, Shivrai Kulkarni. He told us that the image is edited and created with an intention to spread hatred among the people.

In the last step of investigation, we did a social background check of the user who shared the edited image. विकास कैमरी अंबेडकरवादी is being followed by 8.9K people.

Conclusion: Noo, this isn’t the image of Union minister Smriti Irani; viral post is fake. The image is edited.